Cassandra Nelson is a humanitarian aid worker with Mercy Corps. She spends most of her time deployed in hotspots and hostile areas. She has worked in Iraq, Darfur, Lebanon, South Sudan, Zimbabwe, Liberia, North Korea, Sri Lanka, Banda Aceh, Pakistan, Afghanistan and Iran. Here she describes her experiences trying to provide relief in Gaza. 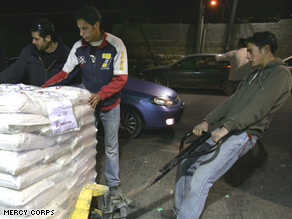 I arrived in Israel yesterday to work with Mercy Corps, an international aid organization, to assist the Gazans who are suffering from the conflict and over 18 months of harsh blockades that have left their cupboards bare and their banks empty of cash.

All of Gaza is on the verge of collapse: Most people have no electricity, no running water and inadequate food supplies. Fuel is running low. And only a fraction of aid needed to sustain Gaza's 1.5 million residents is getting in.

Getting basic food and medical aid into Gaza from Israel has proved to be extremely frustrating and difficult for aid agencies trying to help the civilians who are literally stranded in a war zone.

In 2007 an average of 500 trucks a day entered Gaza with food and supplies. In comparison, yesterday, just 36 humanitarian trucks were allowed access to Gaza. With almost the entire population of 1.5 million Gazans dependent on humanitarian assistance, it is obvious that the incoming aid is not even remotely adequate.

We have spent the past 11 days working through Israeli red tape and protocols that seemed to change daily, to secure the permission to deliver food aid. We have a truck filled with rice, cooking oil, canned tuna fish and edible dates that will feed 2,000 people for about a week.

Yesterday the delivery was supposed go through but at 2:00 a.m. we received notice from the Israeli authorities that the delivery was being postponed because it contained edible dates as part of the package.

The dates had been on the packing list for days and were never questioned; not until 2:00 a.m. the morning we are supposed to go to the border. This is just one delay of many that we have been confronted with by the Israeli authorities. There are days when we seriously wonder if our aid will ever get in.

Last night, the truck was repacked, after having removed the offending dates from the package. Once again, we have the permission to go to the border -- let's just hope it stays that way. I am off this morning for the Kerem Shalom border checkpoint with the truck. Fingers crossed.

At dawn on Thursday, I fought off my jet lag and drove south to the Gaza border with our Mercy Corps truck filled with desperately needed food aid.

Yesterday the Israeli authorities announced there will be a new daily three-hour cease-fire to allow aid organizations to move throughout Gaza starting today, but we are not very optimistic about it really solving the problems: We're still dealing with the same bureaucratic and twisted approval process for getting aid across the check point and into Gaza.

The temporary three-hour cease-fire is totally insufficient and only applies to aid delivery issues for items that are already inside Gaza. It does not help us get more aid into the territory in any way. We need to have the whole Israeli approval system improved so we can get trucks into Gaza in less than a week.

When we reached the Kerem Shalom border at 9:00 a.m. there was a line of about 25 trucks waiting at the border for entry. After about an hour's wait, the Israeli customs officials inspected the delivery and paperwork and asked several questions about where we bought our supplies.

The Mercy Corps vehicle was admitted into the unloading compound with several other aid trucks, all from various U.N. branches. Workers descended on the trucks with forklifts.

After all the items were removed from the truck and placed on the pavement of the compound the security check began. Sniffer dogs were released to check the material. Next an Israeli border worker probed and stabbed every package with a long metal rod to check if anything might be hidden inside. I am assuming they were looking for stowaways among the rice bags, but I can't imagine who would really be trying to get into Gaza when most people there would do anything to escape the constant shelling and bombing.

After the checks were completed all the Israeli workers and other observers and monitors were told to exit back to the Israel side of the border. Once the compound was empty of all people, the gates on the Israeli side were slammed shut.

Israeli guards said that at no point in the process are Israelis and Palestinians from the Gaza side allowed to meet each other. I stood at the gate -- on the Israeli side -- and peered through the slats to watch the Palestinians load up our delivery.

I was relieved at the end -- we had finally made the delivery after so much work and our Gaza staff was receiving the items to distribute. But I had a lingering sadness knowing that the Gazans and the Israelis never come face-to-face at this border check. It makes me wonder how peace can be achieved when all humanity seemed to be absent.