GAZA CITY, Gaza (CNN) -- Israeli aircraft and troops continued their assault on Gaza on Sunday, despite an Israeli official's assessment that the two-week-old military operation might be in its final days. 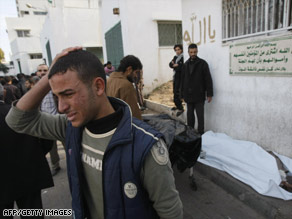 A Palestinian man mourns in front of the morgue at Gaza City's Shifa Hospital on Sunday.

Israel has said the air and ground operation is aimed at stopping rocket fire from Gaza, but militants have continued to launch rockets and mortar shells into southern Israel.

At least 20 rockets struck Israel on Sunday, including a kindergarten in the southern city of Ashdod, causing some damage but no casualties, according to an Israeli military statement.

Israeli soldiers on Sunday closed in on Gaza City from the north and the south. Residents said heavy shelling and large plumes of black smoke emanated from the city. Also, there was heavy gunfire in northeast Gaza from a location where two rockets were launched toward Israel on Sunday.

Thirty-three Palestinians, including a pregnant woman, were killed in Gaza on Sunday, Palestinian medical sources said. That brings the total killed to 898 and 3,695 injured in Gaza since the start of fighting December 27, the sources said.

Watch rockets light up the sky in Gaza »

Forty-five percent of the dead were women and children, the sources said.

Watch the plight of civilians in Gaza »

In addition to Palestinians injured, two Egyptian children and two Egyptian police officers were also wounded by shrapnel from an Israeli air strike during an operation targeting tunnels and other infrastructure used by Hamas.

"The Israeli Air Force were targeting tunnels and other parts of the Hamas terror infrastructure in the Philadelphia Corridor on the Gaza side of the border and unfortunately during the course of one of those attacks, shrapnel went over to the Egyptian side, " said a military spokesperson.

The IDF said they regret the incident.

CNN's Karl Penhaul reported from just inside the Egyptian border that he witnessed an Israeli F-16 drop a bomb on unoccupied land between the border fences of Gaza and Egypt. The jet then flew into Egyptian air space, Penhaul said.

An official in the Egyptian prime minister's office said Israel did not have permission to fly into Egyptian space. The Israeli military on Sunday denied the report.

Thirteen Israelis, including 10 soldiers, have died in the Gaza fighting and in rocket attacks on southern Israel since December 27.

Watch more about the impact of air strikes »

Israel may be close to "the end of the operation" because of a United Nations Security Council resolution calling for an immediate cease-fire, Israeli Deputy Defense Minister Matan Vilnai said Sunday.

"The decision of the U.N. Security Council doesn't leave us much leeway," Vilnai told Israel Radio. "It would seem then, I'm guessing, that we are close to the end of the ground operation and the end of the operation altogether."

The U.N. resolution was rejected by both Israel and Hamas, which controls Gaza.

Israeli Prime Minister Ehud Olmert told his Cabinet on Sunday that "further patience" is needed, despite the fact that "Israel is nearing the goals it set" for its military operation in Gaza.

"We must not, at the last minute, lose what has been achieved in an unprecedented national effort that restored the spirit of unity to the nation," Olmert said. "The Israeli public, especially the residents of the south, have the requisite patience and willingness -- so does the government."

Israeli paratroopers on Sunday uncovered booby-trapped schools, tunnels and weapon caches in Gaza, the Israeli military said. More than 30 homes in one neighborhood were found to be rigged with explosives, the military said.

"Hamas is booby-trapping every home that is abandoned by its residents," said Brig. Gen. Avi Benayahu, an Israel Defense Forces spokesman.

Israeli troops also targeted more than 40 armed gunmen, according to the IDF, though it did not say whether the gunmen were killed.

An Israeli envoy was expected to return to Cairo, Egypt, by Monday to talk to Egyptian officials trying to negotiate an end to the fighting.

For a fourth day, Israel announced a three-hour "lull" in attacks Sunday to allow Gaza residents to leave their homes to stock up on supplies. The halt in attacks started at 11 a.m.

Watch boat loaded with aid for Gaza prepare to set off »

The mosque was "used for storing weaponry such as machine guns and sophisticated anti-aircraft missiles," the IDF said. "The mosque was also used as a training camp and a gathering place for Hamas members."

The home of Ahmed Jabri, the chief of Hamas' military wing, was also struck by Israeli missiles, the IDF said.