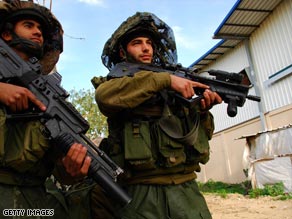 A photo provided by the Israel Defense Forces shows troops in Gaza on Saturday.

Heavy gunfire could be heard to the east of Gaza City -- home to about 400,000 of Gaza's 1.5 million people -- as fighting moved closer, according to a CNN stringer in the area.

Sunday's fighting came after one girl was killed and 49 other people were severely burned by fires caused by Israeli shelling in southern Gaza on Saturday, local hospital sources said.

The shelling ignited several buildings, including a U.N. school, near the city of Khan Younes, sources said. The girl died of burns she suffered in one of the fires, the sources said.

Also Saturday, a family of nine was killed when a shell hit their home in the village of Jebalya in northern Gaza, Palestinian medical sources said.

The Israeli military was "not operating in the area of this house, and no fire was directed in that direction," a spokesman for the Israel Defense Forces said.

Later Saturday, the IDF said that two rocket-launching squads near Jebalya were hit.

And the Hamas commander in charge of launching rockets into Israel from the Gaza City area was killed Saturday by Israeli ground fire, the IDF said.

Amir Mansi was spotted firing a rocket Saturday from the Jabel Rise area, east of Gaza City, during a ground force operation, the IDF said. Israeli forces opened fire, killing Mansi and wounding two other Hamas operatives, who were captured, the Israelis said.

Watch what overnight air attacks did »

Mansi was the leading Hamas authority on the Grad long-range missile-launching system, the IDF said. Grad rockets have allowed Hamas to reach farther into Israel than in previous attacks.

The operation began with airstrikes; a week later, the Israeli military launched a ground assault.

More than 800 Palestinians have been killed in the attacks, including 235 children, and about 3,300 people have been wounded, according to Palestinian medical sources. Thirteen Israelis, including 10 soldiers, have died since the operation began.

"We can tell they're coming through Egyptian airspace because they're over the far side of the building where we're standing," CNN's Karl Penhaul reported from Rafah, Egypt. He was atop a building about 500 meters (547 yards) from the Gaza border.

The Israelis have been bombing tunnels that run under the border of southern Gaza and Egypt. Israel says Hamas smuggles weapons and munitions through them into Gaza.

A spokesman for the Egyptian prime minister's office said the Israeli aircraft did not have permission to use the airspace. Israeli government spokesman Mark Regev said no airspace violation had occurred.

Before strafing the area in and around Rafah, the Israeli air force dropped leaflets warning residents to leave their homes because more Israeli attacks were imminent, Palestinian security sources said.

According to an IDF spokesman, the leaflets say: "Two days ago, the IDF distributed leaflets in Rafah in which the residents were warned to evacuate their homes for their own safety. As they heeded the IDF instructions, the harming of residents in combat was avoided.

In Gaza City on Saturday afternoon, heavy black smoke rose during a three-hour period during which Israel was to halt its attacks on militants so Palestinians could stock up on supplies.

CNN's Ben Wedeman said the lulls, which have been tried before, aren't "rock solid." Limited military activity continues during that period, he said.

A United Nations spokesman said Saturday's pause was not long enough to resume the transport of humanitarian supplies from Israel into Gaza. iReport.com: Share thoughts, reactions to crisis in the Middle East

Exiled Hamas leader Khaled Mashaal said during a televised news conference Saturday night that his followers will consider any proposals to stop the violence if conditions are met: the Israelis stop their "aggression" and all crossings between Israel and Gaza are opened.

"These are our just demands, and with an open mind we will interact with any initiative," Mashaal said.