BEIRUT, Lebanon (CNN) -- Lebanon's prime minister condemned the firing of rockets into northern Israel after an attack wounded two Israelis on Thursday. He said his government is trying to determine who was responsible. 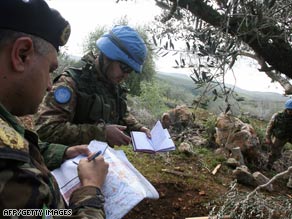 U.N. soldiers on Thursday inspect the site in Lebanon thought to be the source of rockets fired into Israel.

Israel's military warned Israeli civilians to stick close to shelters after police said at least four rockets hit near the city of Nahariya, about 6 miles (10 kilometers) south of the Lebanese border. The Israeli military said it returned fire across the border with mortars.

Schools and kindergartens were closed in Nahariya and the nearby town of Shlomi, the Israel Defense Forces reported.

"What happened in the south [of Lebanon] is a violation of Resolution 1701 and is rejected by Lebanon," Lebanese Prime Minister Fouad Siniora said, referring to the U.N. resolution that ended the 2006 conflict between Israel and Lebanon's Hezbollah militia.

In a statement issued by his office, Siniora said he has asked Lebanese authorities to investigate the attack alongside troops from the U.N. peacekeeping force deployed along the border. He also condemned the Israeli retaliatory strikes, which the Lebanese military said inflicted no casualties.

There was no immediate claim of responsibility for the attacks, which came as Israeli airstrikes on Gaza, to the south, entered a 13th day.

The Israeli campaign in Gaza is aimed at halting rocket fire from the Hamas-ruled Palestinian territory. Israel fought a similar battle against the Lebanese Shiite Muslim militia Hezbollah in 2006, during which Hezbollah rained rockets on cities in Israeli's north for a month before a cease-fire was reached.

Andrea Tenenti, a spokesman for UNIFIL, the U.N. peacekeeping mission in Lebanon, said the rockets appear to have been fired from a point about 4.5 miles east of Naqoura, where the peacekeepers are headquartered.

"We've been intensifying our patrols on the ground in order to prevent any further incident," Tenenti said.

He said UNIFIL's commander, Maj. Gen. Claudio Graziano, is in "constant and close contact" with both sides "and has urged maximum restraint in order to prevent any escalation of the situation."

CNN's Michal Zippori in Jerusalem and Cal Perry and Nada Husseini in Beirut contributed to this report.

All About Israel • Lebanon • Hezbollah