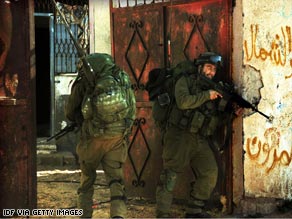 A photo provided by the Israel Defense Forces shows Israeli paratroopers in Gaza on Thursday.

Fourteen of the council's 15 members voted in favor of the resolution, with U.S. Secretary of State Condoleezza Rice abstaining from the vote on behalf of the United States.

The resolution expresses "grave concern" about the growing humanitarian crisis and heavy civilian casualties in Gaza, as well as civilian deaths in Israel from Hamas rocket fire.

Roughly 765 Palestinians and 13 Israelis, including 10 soldiers, have been killed since Israel began its military assault on Gaza on December 27.

The resolution "stresses the urgency of, and calls for, an immediate, durable, and fully respected cease-fire which will lead to the full withdrawal of Israeli forces from Gaza."

"We are all very conscious that peace is made on the ground while resolutions are written in the U.N.," said British Foreign Secretary David Miliband. "Our job here is to support the efforts for peace on the ground and turn the good words on paper into changes on the ground that are so desperately needed."

Rice applauded the resolution's goals, but said the United States prefers to wait for results of ongoing, Egyptian-brokered talks in Cairo, Egypt, with Israeli and Palestinian leaders.

Watch U.N. secretary-general say he is heartened and relieved after vote »

The resolution welcomes efforts by Egyptian President Hosni Mubarak to broker a cease-fire. It calls for opening corridors to allow humanitarian aid into Gaza -- where food, water, electricity and medicine shortages have worsened already poor conditions since Israel's offensive in Gaza began.

Israel's ambassador to the United Nations, Gabriela Shalev, told the Security Council that Hamas rocket attacks "left us with no choice."

"The responsibility for the current hostilities lies squarely on Hamas," she said. "The international community must focus its efforts on the Hamas activity and make sure that the terrorist activity can never be legitimate."

The Israeli military says its operation is aimed at halting the firing of rockets into southern Israel by Hamas, which has controlled Gaza since 2007.

"Security for the people of Gaza, too. Not security for Israel alone," Arab League Secretary General Amr Moussa, of Egypt, said before the vote as reporters were asking diplomats about the resolution.

The 15-member Security Council is tasked by the United Nations with establishing and maintaining peace around the globe. It has the power to create peacekeeping operations, impose sanctions and authorize military action.

The United States, Russia, China, France and Great Britain are the five permanent members, with the other 10 elected by the U.N. assembly to two-year terms. Any one of the permanent members can veto a resolution.

CNN's Terence Burke and Richard Roth contributed to this report.