(CNN) -- The International Committee of the Red Cross called on Israel to allow it immediate access to Gaza, saying a trip into Gaza City revealed weak children laying with their dead mothers and other "shocking" scenes. 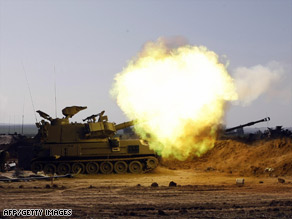 Israeli artillery fires a shell toward Gaza from the Israel-Gaza border on Wednesday.

Red Cross workers and four ambulances from the Palestine Red Crescent Society managed to enter the Zaytun neighborhood of Gaza City on Wednesday, according to a written release. The crew found four children, too weak to stand, next to their dead mothers in a house containing 12 corpses, the statement says.

Other houses revealed more wounded and three more corpses, the release said. It said Israeli soldiers posted near the houses ordered the rescue team to leave the area -- an order the team refused.

A spokesman for Israel's military said early Thursday that the Red Cross's news release was the first he had heard of the alleged incident. Speaking after midnight, the spokesman said he was unsure if Israel has received a formal request to investigate.

"We do make every effort and our soldiers do put themselves at risk" to help wounded civilians, the spokesman told CNN's Christiane Amanpour.

The Red Cross release said the children and other wounded were taken to ambulances in a donkey cart because earth walls erected by Israeli soldiers made it impossible for the ambulances to reach their neighborhood.

It said the group was told more wounded people were in the neighborhood, and demanded that Israel grant it and the Red Crescent immediate access and safe passage to search for them.

The Israeli spokesman said the military has established a 24-hour liaison to maintain contacts with humanitarian organizations.

The Israeli military operation in Gaza has killed at least 680 people and injured more than 3,000 since it launched December 27, Palestinian medical sources said Wednesday. Thirty percent of the deaths are women and children, according to the U.N.'s Office for the Coordination of Humanitarian Affairs, citing statistics released Tuesday by the Palestinian Ministry of Health.

Seven Israeli soldiers and three civilians have been killed since the operation, the Israeli military reported.

Israel says the purpose of the operation is to stop Hamas militants from firing rockets from Gaza into southern Israel.