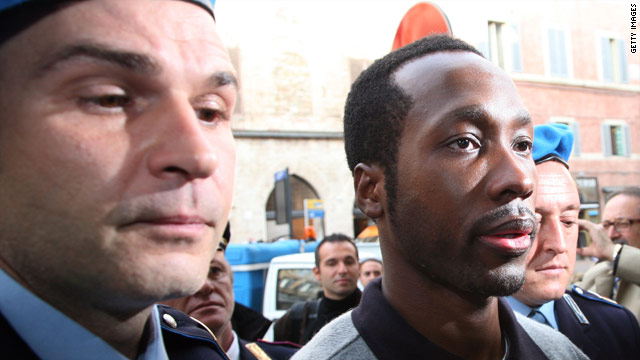 Rudy Guede has had his sentence reduced to 16 years for the murder of British student Meredith Kercher.
STORY HIGHLIGHTS

Rome, Italy (CNN) -- One of the men convicted of killing British exchange student Meredith Kercher in Perugia, Italy, in 2007 has had his sentence reduced on appeal, a lawyer in the case said Tuesday.

Rudy Guede was originally sentenced to 30 years in prison, but the appeal court cut the term to 16 years, said Francesco Maresca, a lawyer for the Kercher family.

The reduction was based on technical calculations prescribed by the Italian penal code, he said.

Kercher's American roommate, Amanda Knox, and Knox's sometime-boyfriend, Raffaele Sollecito, also were convicted of the killing, in a separate trial that concluded earlier this month.

Guede, a native of the Ivory Coast, was convicted of murder and attempted sexual assault in October 2008.

Knox -- Kercher's roommate at the time of the killing -- was sentenced to 26 years, while Sollecito got 25. Both will appeal, attorneys said.

The two were convicted of charges including murder, possession of a deadly weapon and interfering with a crime scene. Together they must pay five million euros (about $7.1 million) to the victim's family. In addition, Knox must pay 40,000 euros (about $57,000) to a man whom she falsely accused of the killing.

In a written statement, Knox's parents described themselves as "extremely disappointed" with the verdict when it came down.

Kercher's family said they were satisfied.

"Ultimately we are pleased with the decision," said Lyle Kercher, Meredith's brother. "But it was not a moment of celebration. We are here because our sister was brutally murdered."

The victim's sister, Stephanie Kercher, talked after the verdict about her family's grief.

"Our lives have been on hold really. You can't really carry on as normal. You have to take each day as it comes. It's not ever going to be the same without Mez," she said, using her sister's nickname.

Prosecutors had asked for a sentence of life in prison. Italy does not have the death penalty.

Knox, 22, and Sollecito, 25, were convicted after an 11-month trial in the university town 115 miles (185 kilometers) north of Rome. Both were arrested shortly after the slaying, and both also were charged with sexual violence.

Knox testified in court that she was not home at the time of the slaying.

Sollecito also denied any role in the killing. "I was not at the scene of the crime," he testified.

Prosecutors say Kercher died during a sex game in which Knox taunted Kercher while Sollecito and Guede sexually assaulted her.

Knox's defense attorneys cast doubt on the knife, saying it matched neither Kercher's wounds nor a knife imprint left on a bedsheet. They also said the DNA sample was too small to be conclusive.

Knox's and Sollecito's appeals are expected to begin some time next year.