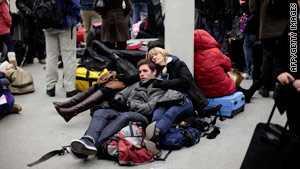 Stranded passengers wait at a London terminal Saturday after a series of train breakdowns inside the Channel Tunnel.
STORY HIGHLIGHTS

London, England (CNN) -- Eurostar is running tests to try to figure out what caused an "unprecedented" six trains to break down, forcing the company to cancel all services this weekend, a spokeswoman said Sunday.

The company announced later that Monday service will be halted as well to allow for more test runs.

The cancellation of the England-to-France express train service stranded thousands of passengers on both sides of the English Channel on the weekend before Christmas.

"We sincerely regret having to take this decision and we understand how frustrated and disappointed travelers will be," Eurostar said on its Web site Sunday.

Five trains with about 2,000 passengers stopped running Friday night inside the Channel Tunnel, also called the Chunnel, which runs between Britain and France. A sixth train broke down Saturday after Eurostar tried to run four trains from London to the continental mainland to prepare for the resumption of normal service. About 700 people were aboard when that train stopped in the Ebbsfleet area of Kent.

Eurostar is making an effort to get about 500 people in "emergency situations" out of London, a spokesman said.

We strongly recommend that travelers whose journeys are not essential change their tickets.
--Eurostar

They are being put on a regular train to the coastal town of Dover, England, taken across the English Channel by ferry and then by bus to Brussels or Paris, said the spokesman, who declined to be named.

Eurostar is conducting a series of test trains Sunday "to better understand the problems that have been occurring," the company said.

"We are committed to restoring our services as soon as possible but our key priority is the safety and comfort of our customers," the statement said.

Those passengers affected by the breakdowns are being offered a full refund, another return ticket and 150 pounds in compensation. About 25,000 people should have been traveling on Saturday, Eurostar said.

The company is not taking any new bookings until after Christmas, it announced, and is urging people not to come to the station Sunday.

"We strongly recommend that travelers whose journeys are not essential change their tickets for travel on a later date or have their tickets refunded," Eurostar said on its Web site.

The trains became stuck in the tunnel because the air inside was much warmer than the air outside the tunnel entrance in France, Eurostar spokeswoman Amelle Mouhaddib said.

"It's a bit like taking a bottle of beer out of the fridge into a warm room -- within minutes it's covered in condensation," said Eurostar CEO Richard Brown. "We think that was the principle cause of the electrical failures on the trains."

Eurotunnel, which operates the Channel Tunnel, said it evacuated all 1,364 Eurostar passengers who were stuck Friday after the trains "lost traction," but one of the five trains remained in the tunnel and was blocking part of it, according to a Eurotunnel spokeswoman who asked not to be named, in line with policy.

The train that broke down Saturday was being towed back to the tunnel entry so passengers could be removed and transferred, Eurostar said.

The problems started after 9 p.m. Friday when the first of the five Eurostar trains became stuck. It was helped out of the tunnel by a Eurotunnel locomotive, which took it all the way to London with passengers still on board, the Eurotunnel spokeswoman said.

Passengers on the second and third trains to fail were evacuated via the service tunnel to a Eurotunnel train, which brought them to the exit, she said. One of the failed trains was pulled out of the tunnel, but authorities were having difficulty removing the other, she said.

The fourth and fifth trains were running close together when they failed, so Eurotunnel locomotives coupled them and either pushed or pulled them to the English side of the tunnel, the spokeswoman said.

Passengers from the fifth train boarded the one in front, and Eurotunnel locomotives then towed that train to London, she said.

The Chunnel is two tunnels separated by a third and smaller service tunnel, so the train that remained stuck inside did not mean the entire tunnel was blocked, the Eurotunnel spokeswoman said.

Brown said keeping passengers on the trains is the quickest and safest evacuation method.

"Because there were five trains, it took us ... longer than we would wish to get those trains out and those passengers on their way home," he said.

Despite the stoppage of service Saturday, noncommercial vehicles, including cars, motorbikes, and camper vans, were still able to travel through the tunnel.

CNN's Paula Newton and Melissa Gray contributed to this report.