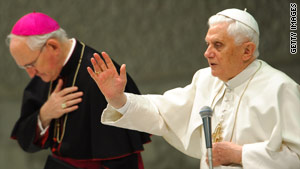 The statement came after the pope met with senior Irish bishops at the Vatican and discussed the report, published last month by the Dublin Archdiocese Commission of Investigation.

"He wishes once more to express his profound regret at the actions of some members of the clergy who have betrayed their solemn promises to God, as well as the trust placed in them by the victims and their families, and by society at large," the Vatican said.

"The Holy Father shares the outrage, betrayal and shame felt by so many of the faithful in Ireland, and he is united with them in prayer at this difficult time in the life of the church."

In its 720-page report, the commission said there was "no doubt" that sexual abuse of children by clergy was covered up from January 1975 to May 2004, the time covered by the report.

Child sexual abuse was "widespread" during that time period, the report said. Clergy focused on maintaining secrecy and avoiding scandal rather than protecting children's welfare, it said.

It also shot down the notion that church leadership was unaware of the problem, in contrast to what the Dublin archdiocese and other church authorities had claimed.

The report prompted an apology from Archbishop Diarmuid Martin and condemnation from Irish Justice Minister Dermot Ahern, who said he felt "a growing sense of revulsion and anger" as he read the report.

The pope promised that the Catholic Church would continue to follow the issue and try to develop "effective and secure strategies" to make sure the abuses don't happen again.

"The Holy Father intends to address a pastoral Letter to the faithful of Ireland in which he will clearly indicate the initiatives that are to be taken in response to the situation," the Vatican said.