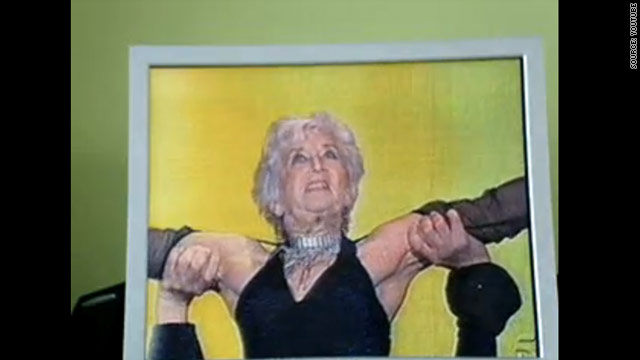 (CNN) -- Spain's answer to Susan Boyle took to the stage in a national talent show and produced a jaw-dropping display of athletic ability to win the competition.

The show-stopper was 75-year-old British grandmother Paddy Jones who reportedly returned to dancing just five years ago after the death of her husband.

Jones, who is originally from Stourbridge in the West Midlands, England, appeared on stage in front of a studio audience with a partner 40 years her junior.

The unlikely partners proceeded to perform a high-energy sequence of gravity-defying lifts, spins and flips.

Clips of Jones' performance on "Tu Si Que Vales," the Spanish equivalent of "Britain's Got Talent," are attracting hits on video-sharing site YouTube and comments including "wonderful," "excellent" and "incredible woman!!"

Jones, whose real name is Sarah, told the local Stourbridge News that she was stunned by her newfound fame.

"It's crazy -- life has just turned upside down. We're absolutely over the moon. I never really expected it," she said.

"Since then we've been recognized everywhere. I was in the doctor's and people were coming up to me, and at the supermarket and even when I went to fill up with petrol. It's absolutely wonderful."

The Stourbridge News reported that Jones was a professional dancer in her youth. She now lives in Gandia, near Valencia in Spain and is said to have taken up salsa dancing five years ago to keep herself entertained.

On the program, Jones is seen stepping onto the stage in impressively high heels, arm-in-arm with the local dance school instructor, Nico. He explains to the clearly incredulous judges that they will be performing "salsa acrobatica."

Seconds into the routine, he hoists Jones onto his shoulders, from where she executes a proficient backflip. The cameras cut away to show one judge's astonished expression while the audience cheers.

From there, the routine becomes even more physical and ends when Nico flips Jones upside down and over his shoulder, drawing a standing ovation from the judges and the crowd.

Jones' triumphant confounding of expectations echoes that of "Britain's Got Talent" winner Susan Boyle who soared to international stardom with her unexpectedly tuneful rendition of "I Dreamed a Dream."

Last week Boyle, who is known by her fanbase as SuBo, set a new record in the U.S. for the most albums sold by any artist in a single week, with the largest ever sales debut for a female artist.

Boyle's "I Dreamed a Dream" album hit the top of the Billboard 200 albums chart with 701,000 copies sold in its first week, according to Nielsen SoundScan.

Before finding fame, the unmarried 48-year-old lived in a modest home in a small town in Scotland with her pet cat.