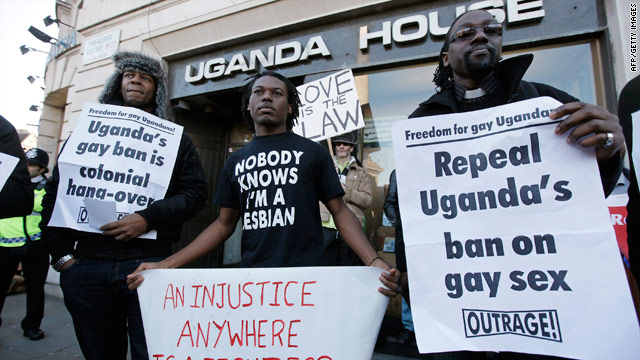 They compared Ugandan President Yoweri Museveni to some of the world's most notorious dictators.

"He... is bringing in a bill in an attempt to criminalize being gay," the activist said.

"That is not right. We cannot allow fascism to return to Uganda. He should leave power and go because he is not taking the country anywhere but to disaster," he added.

Under proposed new laws currently being considered by the Ugandan parliament, those who test positive for HIV, the virus that causes AIDS, could face the death penalty.

In addition, those convicted of having gay sex would be sentenced to life in prison, while anyone found guilty of engaging in homosexual relations on more than one occasion would be executed.

The proposals could become law before the end of the year.

Museveni has not publicly stated his support for the bill.

Homosexuality is already illegal in Uganda under laws passed in the colonial era, but the new legislation is intended to provide prosecutors with more power.

It has the blessing of various religious leaders, with one leading Muslim cleric -- Sheikh Ramathan Shaban Mubajje -- calling for all known homosexuals in the country to be rounded up and left on an island until they die.

Thursday's protest at the Ugandan High Commission -- or embassy -- in London is one of several planned demonstrations around the world, and OutRage, another gay rights organization, is backing the calls for action to be taken.

"President Museveni is fast becoming the Robert Mugabe of Uganda and that's a threat to the civil rights of every Ugandan person -- gay or straight," OutRage spokesman Peter Tatchell told CNN, referring to the authoritarian president of Zimbabwe.

"There's a huge ground swell of public opinion that this bill goes way too far. Even people who say they're against homosexuality say this bill is excessive and a threat to the human rights of all Ugandans.