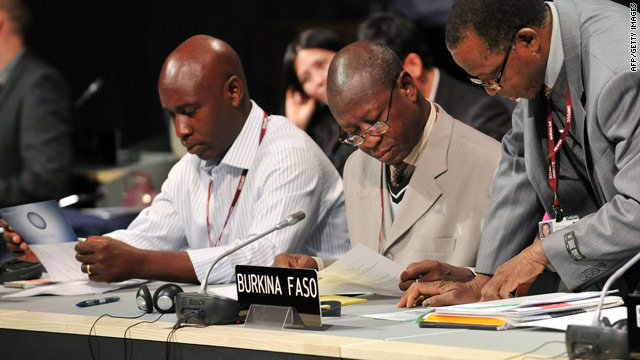 Delegates from Burkina Faso at the UN climate talks in Copenhagen which run from December 7 to 18.
STORY HIGHLIGHTS

(CNN) -- A leaked document known as the "Danish text" has driven an even deeper wedge between rich and poor countries embroiled in U.N. climate talks in Copenhagen.

Developing countries have reacted angrily to the text, alleging developed countries have worked behind closed doors to draft a document slanted in their favor.

"It's an incredibly imbalanced text intended to subvert, absolutely and completely, two years of negotiations. It does not recognize the proposals and the voice of developing countries," said Lumumba Stanislaus Dia Ping, the Sudanese ambassador to the Group of 77 developing countries.

What is at stake in Copenhagen?

China also criticized portions of the text that refer to a "peak" year for carbon emissions from developing countries.

"The developing countries' individual mitigation action could in aggregate yield a [Y percent] deviation in [2020] from business as usual and yielding their collective emissions peak before [20XX] and decline thereafter," the document says. It is expected the figures represented by X and Y will be added during the course of negotiations.

"It is unfair to set such a peak target for developing countries which are still in the stage of industrialization," said Su Wei, Deputy Head of the Chinese climate delegation.

The U.N. body hosting the talks has played down the document's importance, stressing that it is an "informal paper" put forward by the Danish prime minister.

"This was an informal paper ahead of the conference given to a number of people for the purposes of consultations. The only formal texts in the U.N. process are the ones tabled by the Chairs of this Copenhagen conference at the behest of the Parties," said Yvo de Boer, Executive Secretary of the United Nations Framework Convention on Climate Change (UNFCCC).

The draft text also proposes that the money is distributed by a "Climate Fund" by a board with "balanced representation."

"Like ants in a room full of elephants poor countries are at risk of been squeezed out of the climate talks in Copenhagen," said Antonio Hill, Oxfam International's climate adviser.

He said an alternative proposal from China and other emerging economies offered a more "balanced vision," adding it "also needs significant work if it is going to serve the needs of the world's poorest people and prevent a climate catastrophe."

Around 15,000 delegates are meeting daily in Copenhagen as they seek to form a global agreement on climate change.

Next week they will be joined by around 100 heads of state to form a final deal, if negotiations in the coming days succeed in closing the gap between rich and poor nations.