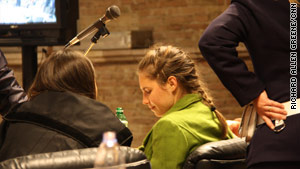 Amanda Knox sits in court during her murder trial in Perugia, Italy, on Thursday.

Jury deliberations are expected to begin Friday in the murder case against Amanda Knox in her roommate's death. Anderson Cooper has the latest developments in the case. "Anderson Cooper 360 °," at 10 p.m. ET Thursday.

Perugia, Italy (CNN) -- American student Amanda Knox took the stand for a third time Thursday, telling jurors in her Italian murder trial she is not an "assassin" who killed her former roommate.

Knox and her Italian former boyfriend, Raffaele Sollecito, are charged with murder and sexual violence in the November 2007 knifing death of Meredith Kercher. Knox and Kercher, a British exchange student, were roommates. A third suspect was found guilty in a separate trial and is appealing.

"They say that I am calm. I am not calm," Knox said in Italian. "I fear to lose myself, to have the mask of the assassin forced upon me. I fear to be defined as someone I am not."

Knox and Sollecito were arrested shortly after the November 2007 slaying.

"After years of prison, I confess that I feel sad and frustrated," Knox said. "In front of you, I feel vulnerable, but I am confident of what I know. My lawyers, my family and my friends save my life every day.

Knox previously testified in June, when she said she was not home at the time of the slaying.

"I am not a violent person," he said. "I've not killed Meredith. I was not at the scene of the crime. Everyday I hope that the guilty one confesses. I ask you to give me back my life," he said.

Sollecito did not face any questioning.

Before his testimony, prosecutor Manuela Comodi offered a rebuttal to defense claims of sloppy evidence-gathering at the crime scene. She focused on the technical aspects of the evidence against Knox and Sollecito and questioned the forensic arguments used by the defense. She also defended the investigators, calling them professionals who stayed out of the media show surrounding the case.

Comodi rejected allegations that Sollecito's DNA found on a bra belonging to Kercher could have been contaminated. Other than a cigarette butt in the kitchen with Sollecito's DNA on it, she said, investigators did not find his DNA anywhere else in the house. The bra, the prosecutor said, was found in the bedroom where Kercher was killed. Forensics investigators wore gloves when retrieving the bra, Comodi said.

That proves, she said, that Sollecito was at the crime scene when the slaying took place.

Sollecito also left other traces of having been in the house, including footprints, she said. Some of the footprints were found in the bathroom, Comodi said.

On Wednesday, a defense lawyer for Knox made an impassioned plea to the jury.

"We suffer at the memory of Meredith. But we look at the future of Amanda," Luciano Ghirga said in his defense summation.

"Meredith was my friend," he quoted Knox as saying, rejecting the notion that the American student hated her roommate.

Prosecutors say Kercher died during a twisted sex game in which Knox taunted Kercher while Sollecito and acquaintance Rudy Guede sexually assaulted her.

But Ghirga rejected the accusations against Knox.

He attacked the way police and prosecutors had treated the defendant.

Ghirga concluded an emotional oration -- sobbing as he came to the end -- by asking the judge and jury to acquit Knox, because her mother asked him to request it, because her family asked it.

Knox's father, Curt, said Wednesday she had been a victim of "character assassination."

But prosecutor Giuliano Mignini accused the defense of "lynching" the Italian police who worked on the case.

Every day I hope that the guilty one confesses. I ask you to give me back my life.
--Raffaele Sollecito, charged with the murder of Meredith Kercher

He defended the work of the police and the credibility of the prosecution witnesses as he responded to Ghirga's arguments Wednesday.

And he called again for life sentences for Knox and Sollecito if they are found guilty. Italy does not have the death penalty.

The jury is expected to begin deliberations Friday, after the prosecution completes its summary.

Another Knox attorney on Tuesday said the prosecution's theory doesn't fit the facts of the case and there is not sufficient evidence to find Knox guilty.

Calling Knox a victim, Carlo della Vedova said police rushed to judgment, leaving Knox to fend off a myriad of false media reports regarding the crime.

The lawyer showed photos published in the media, purportedly showing the crime scene, that weren't authentic, and said false allegations and rumors about Knox's character created a bias from the start.

Della Vedova also questioned the change in what prosecutor Mignini said was the motive for the killing.

In preliminary hearings Mignini argued Knox, Sollecito and Guede slashed Kercher's throat during a sexual misadventure as the two men vied for Knox's attention. In recent days, Mignini has focused more on what he says was a hatred between the two roommates.

Ghirga said they had gone to a chocolate festival together days before Kercher was killed.

The defense has argued that Guede, who was convicted in a separate fast-track trial and is appealing his conviction, was the sole killer. The defense has said there is no evidence tying the three suspects together or proving they planned Kercher's murder.

Della Vedova also focused during closing arguments on the lack of evidence tying Knox to the crime scene.

As defense lawyers have throughout the trial, he cast doubt on DNA evidence prosecutors claim shows Knox's DNA on a knife. The defense has claimed the knife doesn't match Kercher's wounds or an imprint of a knife left on a bedsheet. They also claimed the DNA sample is too small to be conclusive.

During the first day of closing arguments for Knox's lawyers, della Vedova stressed to the eight-member jury that they should also keep church law in mind. He told the jury they needed to be "morally certain of their decision."

"If you have the minimum of doubts, you must absolve this young girl -- a girl that is merely 22 years old," he said.

CNN's Richard Greene in Italy and Mallory Simon in Atlanta contributed to this report.