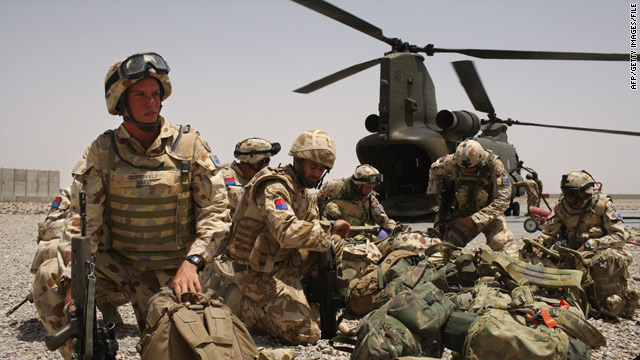 Additional troops promised by Gordon Brown will take the UK's deployment in Afghanistan to 9,500.
STORY HIGHLIGHTS

London, England (CNN) -- The United Kingdom will send an additional 500 troops to Afghanistan in early December, bringing the British contingent there to more than 9,500, Prime Minister Gordon Brown announced Monday.

"We must address the terrorist threat at its source," Brown told lawmakers, adding: "Our task is to prevent the Taliban from giving al Qaeda ... safe haven.

"Instability in Afghanistan can only increase the risk of conflagration where the rest of the world can least afford it."

Brown regularly links British security to events in Afghanistan and Pakistan, saying attacks on London and other British targets have been planned in South Asia.

He announced in October the decision in principle to boost force levels, but said certain conditions -- including proper equipment for the British troops and more troop commitments from other countries -- had to be met first.

The United Kingdom has the largest contingent in Afghanistan after the United States. The figure of 9,500 does not include special forces, said Brown, who declined to say exactly how many are there, but indicated it is more than 500.

Brown's announcement coincided with the news that a British soldier was killed by an explosion in Afghanistan's Helmand province, where troops have been entrenched in heavy combat with Taliban insurgents since July 2006.

The soldier, from the 1st Battalion, Coldstream Guards, died as a result of injuries sustained in the Babaji area, the Ministry of Defence said in a statement.

Britain has lost more than 200 service personnel in Afghanistan since the start of fighting in 2001. More than 100 were lost in the past year.