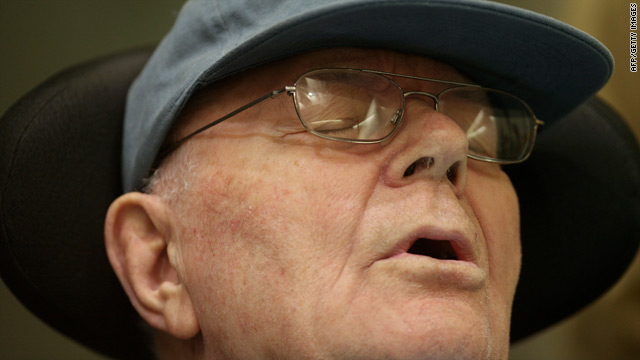 John Demjanjuk denies any role in the Holocaust.
STORY HIGHLIGHTS

MUNICH, Germany (CNN) -- Alleged Nazi camp guard John Demjanjuk had no choice but to bring Jews to their deaths in extermination camps, Demjanjuk's defense argued Monday as his long-awaited trial got under way.

Demjanjuk, 89, faces charges of being an accessory to about 27,900 murders during World War II.

But his defense attorney, Ulrich Busch, said Monday the court was imposing a "moral and judicial double standard."

The retired auto worker from Cleveland, Ohio -- a native Ukrainian -- was a prisoner of war during the conflict, and would have been killed had he not done what the Nazis ordered, the defense team argued.

The defense line that Demjanjuk was forced to help the Nazis represents a change for the defendant, who has denied in the past that he was a camp guard.

The guards forced to help the Nazis were "victims, not culprits -- survivors, not murderers," defense lawyer Busch said.

The Munich state prosecutor brought the charges against Demjanjuk for his alleged role at the Sobibor death camp in Poland, where the Nazis and their accessories killed at least 167,000 people, according to the U.S Holocaust Memorial Museum.

If Demjanjuk is found guilty, it will not be only for 27,900 anonymous murders, but for the murders of victims specifically named by the co-plantiffs.

There are very few remaining survivors of Sobibor.

Demjanjuk's defenders say he was a Soviet prisoner of war at the Trawniki camp, where Nazis trained prisoners to assist with the extermination of about 2 million Jews in occupied Poland. Those prisoners of war had no choice but to assist, the defense said.

Demjanjuk was brought into the court in a wheelchair, accompanied by medical personnel and a German-Ukrainian translator. He did not speak in the opening phase of the trial, and had his eyes shut most of the time.

The trial is expected to last until May of next year.

He was deported in May from the United States to Germany.

The German court originally accused him of complicity in about 29,000 murders. The prosecutor's office said it revised the number because some of those who had allegedly died in the camp when Demjanjuk was there were already dead during the transport to Sobibor.

The Munich State Court ruled earlier this year he was fit to stand trial.

But doctors have restricted the time he can be tried each day to two sessions of 90 minutes each, said Anton Winkler, Munich state prosecutor.