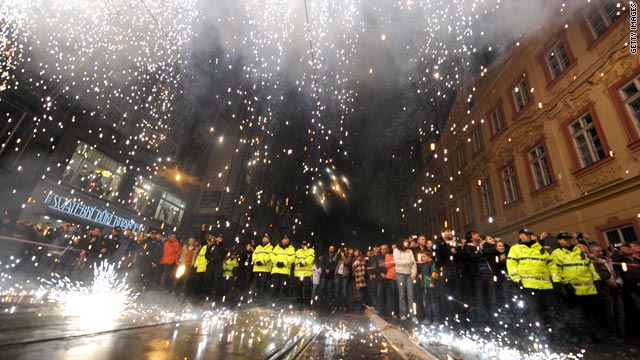 The peaceful 1989 uprising began with a student march to mark a 1939 clampdown on opposition in what was then Nazi-occupied Czechoslovakia. It drew 15,000 people -- students as well as teachers, professors and ordinary Czechs who had grown weary of state control.

Ivan Pilip, one of the students who took part, said the march "was very different" from previous demonstrations he had joined.

"There was a different group of people," he said. "We feel that people that participated in such events before had come, and they're ready to do something. And it was more and more visible every minute."

The protest was held a week after the opening of the Berlin Wall, as pressure was building on the Communist governments of Eastern Europe. When the demonstrators tried to divert the march to central Prague's Wenceslas Square, they were attacked by police -- a response that led tens of thousands more people to join mass demonstrations that lasted another 10 days.

"My kids cannot understand today what was moving our minds and hearts that day 20 years ago," Pilip's wife, Lucie, said Tuesday. "We watched television today to show them what we had come through these 20 years, and I think it's an enormous success."

The protests led to talks between government officials and the Civic Forum, a group of dissidents led by playwright Vaclav Havel. The Communist Party ceded power in December, and Havel became president.

"Many of our citizens who took part in the democratic changes died already with a feeling that they contributed to something that meant a lot," Havel said Tuesday. "In our ordinary, daily lives, we tend to forget our friends of that time -- our comrades, free-thinking individuals."

The anniversary march was capped by a concert that featured dissident musicians of the day, along with American folk singer Joan Baez.

Havel himself appeared onstage with a guitar, but told the crowd, "Don't worry, the guitar doesn't mean I'm going to play today."

"In the beginning there was many times this idea, 'What am I doing here,'" Kocab told CNN recently. "I knew in the future I'd get used to it. And five or 10 days later, I forgot I was a musician and I submerged myself in political negotiations. And I liked it."

The celebration was organized by Opona, a nonprofit group established to observe the milestone anniversary of the dismantling of the Iron Curtain.

"Our inspiration to do this was from our memories -- we still remember the times that preceded the events," said David Gaydecka, one of the organizers. "We believe that the changes in those 20 years have been positive despite all those maladies which came along with the freedom."

-- CNN's Phil Black and Fionnuala Sweeney contributed to this report.