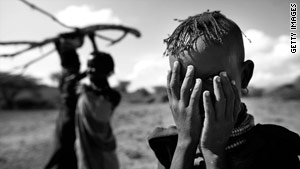 Villagers, such as these in Kenya, face hunger through a shortage of food and water.
STORY HIGHLIGHTS
RELATED TOPICS

(CNN) -- The United Nations launched an online appeal for individual donations to fight hunger as donor nations tackle an economic crisis and, for the first time in history, more than 1 billion face starvation worldwide.

"If a billion Internet users donate a dollar or a euro a week, we can literally transform the lives of a billion hungry people across the world," said Josette Sheeran, executive director of WFP.

Feeding 1 billion people might seem like a challenge, but small donations can make a big difference, Sheeran said.

"Year in, year out, governments have supported WFP in its mission to feed the world's hungriest people, but they cannot be expected to do it alone," Sheeran said. "It's time for members of the public to act."

The campaign comes on the eve of a summit planned for Monday by the U.N. Food and Agriculture Organization. The agency called for a daylong global hunger strike to highlight the issue.

Some top U.N. officials are heeding the call.

Secretary-General Ban Ki-moon plans to fast for 24 hours to show "solidarity with the planet's 1 billion people who do not have enough to eat," said Marie Okabe, his spokeswoman.

The 1 billion number is about 100 million more than last year, the World Food Programme said. To meet the needs, the agency said it has to raise U.S. $6.7 billion. Donations to date stand at U.S. $2.9 billion.

"Citizen action has abolished slavery, given women the right to vote, and helped to ban the use of land mines across much of our planet," Sheeran said. " ... Why shouldn't we draw on that inspiration and try to harness the power of individual action to feed the world's hungriest people?"