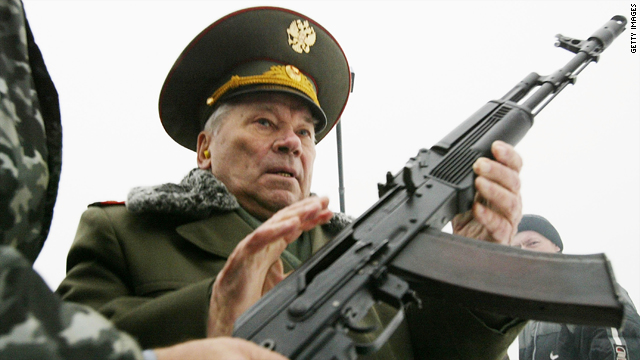 Moscow, Russia (CNN) -- Red Army tank commander Sgt. Mikhail Kalashnikov invented his first machine gun in 1942, during the Second World War, as he sat in a hospital bed recovering from a wound that he got in western Russia.

But as Russians say, the first blintz always comes out wrong. His first model had inborn flaws and defects, and is now on display in an arms museum bearing his name.

It took him several more years to develop and fine-tune what later became an internationally recognized perfect killing instrument -- the AK-47. AK is a Russian acronym for 'Kalashnikov's machine gun,' and 47 stands for the year it was invented.

On Tuesday the legendary weapons designer turned 90. It was a day celebrated in Russia on a scale akin to a national holiday.

In a televised Kremlin ceremony, President Dmitry Medvedev decorated Kalashnikov with the country's highest order, the Hero of Russia.

"You've invented not only the famous Kalashnikov machine gun itself but also a national brand which every Russian, every citizen of our country is proud of," the Russian president said.

"You have lived a long life that is worthy of profound respect," it says. "Each stage of this path is inextricably linked to the history of our country, its heroic and military pages, as well as the development of the domestic weapons industry. Your main achievement -- the Kalashnikov assault rifle -- has repeatedly been recognized as one of the best inventions of the 20th century."

The AK-47, along with its various modifications, has been recognized in the Guinness world record book as being the most common machine gun worldwide. For national armies and paramilitary guerrillas alike, it has been a weapon of choice for more than six decades.

However, Anatoly Isaikin, general director of Rosoboronexport, told journalists that half of an estimated 100 million machine guns under the Kalashnikov brand around the world are fake: They've been produced without a license or a special agreement with the Russian government.

Mikhail Kalashnikov, a small, frail man who seldom appears in public lately, told a CNN crew during an excursion to the arms assembly plant in his home town of Izhevsk, where he has worked at since 1949, that there are two main qualities that describe his machine gun: simplicity and reliability.

"It is a thousand times harder to make simple things than complicated ones," he said, speaking in the high-pitched tremulous voice of an old man. "It is very important because a soldier doesn't have university degrees. He needs a simple and reliable weapon. Just as an academic, for that matter, in a combat situation. There's simply no time to figure how to operate a complicated weapon and press many buttons when the enemy is advancing on you."

Kalashnikov firearms are also renowned for being tough and robust.

In a Russian state TV documentary released the day before Kalashnikov's birthday, the durability of his invention was demonstrated by being whacked against stones and thrown into mud and water. It was still able to fire, in both heat and cold.

In the documentary, filmed at a firing range in Izhevsk, Kalashnikov tested a new brand of a machine gun that he says is 40 percent more efficient than existing models.

At his advanced age, he still works at his design bureau developing new lines of arms. And recently he has authored his sixth book, which carries as its title a version of his life motto: "Everything you need should be simple."

Kalashnikov planned on going back to work the day after his birthday celebrations.

The question he hates most, and the one he's been asked most frequently over the decades, he said, is whether he feels sorry about the hundreds of thousands of people around the world that were killed as a result of his invention. To that, his standard response is, "I've designed my weapon to defend the borders of our Fatherland, and let it continue to serve this purpose."