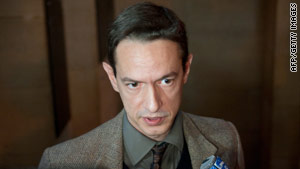 Paris, France (CNN) -- A French court's verdict against the Church of Scientology amounts to a "modern Inquisition" and threatens freedom of religion in France, a senior Scientologist said Tuesday.

Eric Roux, a spokesman for the group and an official representative of the organization's Celebrity Center, also said the church would appeal Tuesday's verdict.

A three-judge panel at the Correctional Court in Paris convicted the church and six of its members of organized fraud, but stopped short of banning the church, as prosecutors had asked.

The court also fined the members as much as 400,000 euros ($595,000) each and sentenced them to as much as two years in prison, though the sentences were suspended.

The decision follows a three-week trial in May and June, during which two plaintiffs said they were defrauded by the organization, which is classified as a sect in France.

Scientology has about 45,000 followers in France, and some of them were in court Tuesday.

One of the judges on the panel said the church may continue its activities in France, but she said those activities must remain "on the correct side of the law."

As part of the penalties, the church was ordered to publish the results of the verdict in several national and international magazines to warn people, the judge said, about what Scientology offers and what was discovered at trial.

"It's an empty case," Roux said. "It's run like an Inquisition, (as) if some people did not wake up from the Inquisition time."

The plaintiffs focused their complaints on the use of a device that Scientologists say measures spiritual well-being. Members used the electropsychometer, or E-Meter, to "locate areas of spiritual duress or travail so they can be addressed and handled," according to Scientology's Web site.

The plaintiffs said that, after using the device, they were encouraged to pay for vitamins and books. They said that amounted to fraud.

He said France was a special case within Europe.

"You have in France a clique of anti-religious extremists that are making a lot of noise," he said.