(CNN) -- A Rwandan accused of "complicity" in the massacre of students at the college he headed during the country's genocide 15 years ago has been arrested in Italy, where he served as a clergyman, an international police agency said. 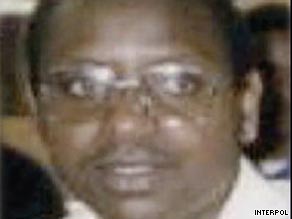 Interpol hailed arrest of Uwayezu as a demonstration of effectiveness of international police co-operation.

Officers from the Italian Carabinieri and Interpol's National Central Bureau in Rome, Italy, arrested Emmanuel Uwayezu -- who had been wanted in Rwanda, the international police organization Interpol said Wednesday in a news release.

Uwayezu, 47, is accused of genocide, conspiracy to commit genocide, complicity in genocide and crimes against humanity. He is in Italian custody and is awaiting extradition to Rwanda.

According to Interpol's statement, the Rwandan arrest warrant says Uwayezu was alleged "to have acted individually and as part of a conspiracy to plan and commit genocide by instigating Hutus to kill Tutsis in the area of Gikongoro, as director of the Groupe Scolaire Marie Merci college in Kibeho."

He is accused of "participating in meetings with government and military authorities which allegedly planned the extermination of the Tutsi ethnic group" and "complicity in the massacre of some 80 students in May 1994 in the college which he headed."

Uwayezu arrived in Italy in 1997, took an alias, and was working as a vicar at the Church in Empoli commune near Florence when he was seized, Interpol said.

The man was identified after Interpol's fugitives unit received information and pictures from Rwandan authorities.

The Archdiocese of Florence issued a statement about the arrest two days ago, saying it hopes the justice system will come up with the truth about the case.

But, it said, "we stand by the fact that Don Emmanuel has always declared his estrangement to the events in question and we accompany him in prayers."

One Italian news report noted that Uwayezu is a priest of Hutu ethnicity and lived and worked as vice-parish priest in Ponzano, part of the county of Empoli.

Don Guido Engels, the head of the parish and a priest, told the ASCA news agency that "Don Emmanuel never cultivated feelings towards another ethnic group. He always wanted peace."

"The arrest of Uwayezu demonstrates the power and effectiveness of international co-operation between police worldwide in obtaining information in relation to the identification, location and apprehension of fugitives around the world," said Jean-Michel Louboutin, Interpol's executive director of police services.

"This operation is a credit to law enforcement officers and agencies in Italy and Rwanda."

Police in Uganda recently arrested and extradited a man who is among the most wanted suspects from the Rwandan genocide. Idelphonse Nizeyimana was picked up at a hotel in Rubaga, a suburb of the capital, Kampala.

The arrest, by Ugandan police, was part of an operation between the tribunal, Ugandan authorities, and Interpol. Nizeyimana was transferred Tuesday to a U.N. detention facility in Arusha, Tanzania, where the tribunal is based.

The 1994 Rwandan genocide left an estimated 800,000 Tutsis and moderate Hutus dead over a 100-day period, the United Nations and Interpol say. Millions more were raped and disfigured, and nearly an entire generation of children lost their parents.

All About Rwanda • Interpol