MADRID, Spain (CNN) -- Thousands flocked to Spain's capital Saturday to protest the Socialist government's move to make it easier to get an abortion. 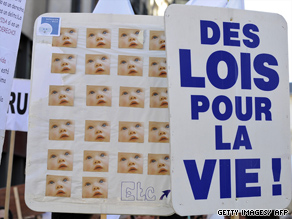 Protesters in Madrid on Saturday demonstrate against legislation to loosen restrictions on abortion in Spain.

The anti-abortion protest, themed "each life is important," began at 5 p.m. in central Madrid and many leading conservative politicians attended, including former Prime Minister Jose Maria Aznar. Local media estimated the crowd in the tens of thousands.

The protest was prompted by a proposed law that would ease restrictions on obtaining an abortion.

Since 1985, abortion has been decriminalized, but only in matters of rape, or when the health of the child or mother is at risk. Victims of rape can legally get an abortion until the 12th week of pregnancy, and women can opt for abortions until the 22nd week of pregnancy if doctors detect a malformation of the fetus.

Most abortions in Spain are performed when the woman's psychological or physical health is at risk, and mainly in private clinics, abortion clinic staffers at Dator Clinic in Madrid told CNN.

The number of abortions has doubled in the past decade in the traditionally Roman Catholic country, from nearly 54,000 in 1998 to 112,000 in 2007, the most recent year for available data, according to Spain's Ministry of Health.

The Socialist government has introduced a bill that would make it easier to get an abortion and give it legal backing, riling up abortion opponents, who already rallied thousands of demonstrators to the streets last March.

The bill, soon to be debated in Parliament, would permit abortions through 14 weeks of pregnancy and set the legal age to obtain an abortion without parental consent at 16 years old.

Supporters say the bill includes the "voluntary interruption of pregnancy" as part of a broader national strategy on sexual and reproductive health, with education and access to contraceptives, aimed at preventing unwanted pregnancies. Unwanted pregnancies have been on the rise in Spain, said Equality Minister Bibiana Aido in May, shortly before the introduction of the bill.

But opponents say the proposed law throws open the door to more abortions.

Benigno Blanco, director of Spanish Family Forum who organized the protest, told conservative newspaper ABC that "this debate won't end until there's not a single abortion." Blanco was a senior official in Aznar's government.

Protesters traveled to the rally from various cities across Spain, and the event had the support of 234 anti-abortion groups from 45 countries, organizers said.

The ruling Socialist party called the conservative-run protest "hypocritical" in a statement Saturday. The marchers said they opposed abortion in general, but the party said conservatives did nothing to completely outlaw abortion during their eight years in power.

Socialist lawmaker Carmen Monton said the protesters are trying to "take the debate back to 20 years ago, when in fact abortion has been going on in Spain."

She said the Socialists, despite the protest on Saturday, are confident of passing the bill with the support of several smaller, mainly leftist parties in parliament. But due to parliamentary schedules, it may not face a vote to become law until early next spring.

All About Abortion • Spain