Albania to India: Give us Mother Teresa

(CNN) -- "By blood, I am Albanian. By citizenship, an Indian. By faith, I am a Catholic nun. As to my calling, I belong to the world." 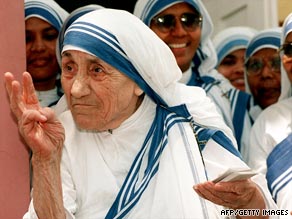 Mother Teresa, pictured in 1997, lived and worked in Kolkata from 1931 until her death.

That's how Mother Teresa chose to describe herself in life. In death, however, her words will probably do little to settle a diplomatic squabble over her remains.

The Albanian government wants to receive her remains before her 100th birthday next year.

But more important, Berisha said, Mother Teresa should rest next to her mother and sister, who are buried in a cemetery in the Albanian capital, Tirana.

"She missed them very much all her life," he said. "My request is a very human one.

"She told me that she prayed every day for her family and her country. That's why I think both governments should talk about [this] and find a solution," Berisha said.

Then there is Macedonia, the nation where Mother Teresa was born and raised. It, too, may stake a claim on the woman who is well on a path to sainthood.

But India, the land where she made her life's work, has made it clear that Mother Teresa, buried in the heart of Kolkata (formerly known as Calcutta), will not be leaving her final resting place.

Though she arrived as a foreigner, Mother Teresa came to be cherished in her adopted home. In billboards and booklets, the city of Kolkata proudly claims her as one of its most famous citizens. She was a devout Catholic who transcended religion, inspiring a nation of millions of poor people, mostly Hindus and Muslims.

She is buried in the courtyard at the nondescript Missionaries of Charity compound in central Kolkata, a site visited by residents and tourists alike. People stream in from the bustling streets to the serenity of Mother House to pay their respects -- and find strength in her presence.

They wander among her order of nuns in their simple blue-bordered white cotton saris. On the second floor is the small and sparse room that belonged to Mother Teresa.

"She has become part and parcel of our national life," said Father Babu Joseph, spokesman for the Catholic Bishops' Conference of India.

"She built a strong bond with India," he said. "People of all religious groups here rather consider her an inalienable part [of India] and therefore we would strongly want the remains to be in India."

Mother Teresa was born as Agnes Gonxha Bojaxhiu to ethnic Albanian parents in Skopje, Macedonia, on August 26, 1910. At 18, she left home and joined the Sisters of Loreto, arriving in India in 1931.

Moved by staggering poverty and human suffering, she started the Missionaries of Charity, dedicating her life to helping those in need. She became a fixture on the streets of Kolkata, often picking up the sick and hungry, and giving them food, shelter and love.

When she accepted her Nobel Peace Prize in 1979, she asked that the gala dinner be canceled and the money be sent instead to help Kolkata's destitute.

Mother Teresa was 87 when she died in 1997, the news eclipsed by Princess Diana's death several days earlier.

Pope John Paul II beatified Mother Teresa in 2003 and she could be canonized by her centennial birthday next year -- a saint in the heavens whose resting place on Earth remains a devilish debate.