By Daniela Deane
For CNN

ROME, Italy (CNN) -- Italian Prime Minister Silvio Berlusconi says he governs Italy out of a sense of duty and sacrifice, not because he enjoys the job. 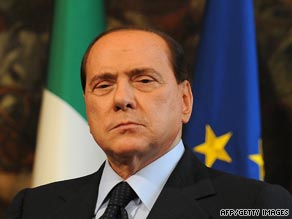 Prime Minister Silvio Berlusconi at a press conference in Rome on Oct. 7, 2009

The conservative, flamboyant Italian leader, 73, says he actually doesn't like governing at all. But he stays in the job because he is considered the "only leader able to hold the center-right together."

Berlusconi says there's nothing simple about the prime minister's job.

He said: "I'm doing what I do with a sense of sacrifice. I don't really like it. Not at all."

He added: "Very often there is a lot of dirty dealing, there is really the gutter press, worse than that, the shameless and sickly. It's a difficult life to be responsible for leading the government in a country like Italy."

In a wide-ranging interview with CNN's Paula Newton, Berlusconi also discussed some of the controversial statements he has made, including calling U.S. President Barack Obama "tanned."

He denied the comment was a gaffe. "I have never made any gaffes, not even one. Every gaffe is invented by the newspapers."

He said he always thinks before he speaks.

"I tell stories and tell jokes," he said. "I only tell jokes that can be heard by anyone. I'm always conscious of what we are talking about."

Berlusconi said his supposed gaffes, like the time he left German Chancellor Angela Merkel waiting by the side of the Rhine while he finished a call on his mobile, were "invented by the papers."

Watch more about his extraordinary year »

Berlusconi explained the incident to CNN, saying had been on the phone to Turkey's PM Recep Tayyip Erdogan. Afterwards Merkel -- who he described as "happy" -- asked him if the call had been successful.

Another time, he startled Britain's Queen Elizabeth II during a group photo at Buckingham Palace when he shouted over to the American president: "Mr. Obama! It's Berlusconi." This prompted the queen to raise a gloved hand and complain: "Why does he have to shout?"

The billionaire media mogul-turned politician also blames the Italian media as the reason his second wife and mother of three of his five children, Veronica Lario, asked him for a divorce, saying Lario erred by believing what was in the Italian papers.

Lario cited Berlusconi's presence at the birthday party of an 18-year-old Naples model, reported in the Italian press, as the reason for seeking a divorce earlier this year.

"There is absolutely nothing at all which is negative," Berlusconi told CNN about his appearance at the birthday party of Noemi Letizia in Naples.

Berlusconi, Italy's longest-serving prime minister, said his friendship with the young woman and her family were "relationships which have a right to privacy."

He said the newspapers had accused him of lying in statements he made to them about it. "I will react and I will explain the situation," Berlusconi told CNN. "I will have all the Italians with me and the accusations will be a boomerang against those who made it against me."

Lario also accused him of choosing starlets and showgirls as European parliament candidates and of consorting with young women.

At the time Lario was interviewed by Dario Cresto-Dina, a reporter from the Italian newspaper La Repubblica, who told CNN, "In Veronica's words, 'This time he went beyond the limit with his latest public humiliation. I want to close this chapter on this marriage."

Allegations that Berlusconi went to parties with escorts were also widely reported. Giampaolo Tarantini, the businessman accused of hiring the escorts denied any wrongdoing and said he brought women to the parties to make a "beautiful impression."

"I have never paid money to those who accompanied me except for refunding their trip expenses," he said in a statement issued in June this year. "I exclude that the premier could have been aware of these reimbursements and I want to ask forgiveness for having involuntarily damaged him."

The scandals have done little damage to Berlusconi's political standing in Italy. Polls have shown his popularity has dipped only slightly, mostly among women, since the scandals broke in the spring.

Watch more about Berlusconi's love for his people »

"When I go around, it's embarrassing to see the affection showered upon me," Berlusconi told CNN. "I know that people can change their opinions ... but I must say that I just note the fact that I am close to the heart of many Italians and they show this to me very often."

Berlusconi, who's also a songwriter, a real estate and insurance tycoon, and owner of Italian soccer team AC Milan, said he's always been "liked by those who have worked with me. I'm liked and loved by all the people in politics."

Even his critics acknowledge his popularity among Italians.

A monthly show that tells the stories of inspirational people

Giulio Anselmi, veteran Italian journalist and chairman of the Italian news agency ANSA, says Berlusconi's popularity is because he's a populist. He describes him as "a man who pulls the most elementary strings of the public opinion; a public opinion, which in Italy in these times, prefers simple paths."

Berlusconi, who controls almost half of Italy's television stations, was elected in 2008 to his third term. The next Italian election, barring an early vote, is scheduled for 2013. His conservative coalition has control of both the Italian Chamber of Deputies and the Senate.

Berlusconi, a former cruise ship singer before turning his hand to media ownership, said he entered politics in 1994 to combat the growing power of the Left and "communist ideology" in the country.

"I couldn't imagine that the country where I had lived, where I had great success as the first Italian entrepreneur, that it would fall prey to these people," he said.

Asked for the secret of his success, the wise-cracking entrepreneur replied: "Everybody knows that I have a sense of friendship, I'm loyal, I always say what I think -- I don't have any hidden thoughts, I don't hide anything, I speak openly."

He also attributed his success to sheer hard work, his practice "not to leave anything undone. To aim for 10 if you want to achieve eight."

Paula Newton contributed to this story.