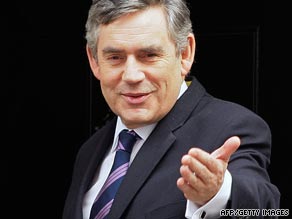 "We will now move further and faster with our strategy" of training Afghan forces to take responsibility for the country's security, he said.

The British have the second-largest contingent in Afghanistan, after the United States, which has about 65,000 -- including 31,800 operating as part of NATO's International Security Assistance Force.

Brown said the troop increase was contingent upon other countries also providing more boots on the ground, the Afghans stepping up their commitment to their own security, and the British troops being properly equipped.

A sudden upsurge in the number of British dead in Afghanistan earlier this year led Brown's critics to argue the British did not have enough helicopters and armored vehicles.

Opposition leader David Cameron of the Conservative Party challenged Brown Wednesday to explain why he was sending 500 troops rather than the 2,000 which Cameron said military commanders wanted.

Brown said he made his decision based on military advice and in consultation with allies including the United States.

Before making his statement in Parliament, Brown paid tribute to the 37 British troops who had been killed in Afghanistan during the lawmakers' summer vacation, naming each individually.

Brown told MPs it remained essential to stabilize the region if al Qaeda was to be denied a base to mount new attacks on the West.

"If we limit ourselves simply to targeting al Qaeda -- without building the capacity of Afghanistan and Pakistan to deal with terrorism and violent extremism -- the security gains will not endure," he said.

His announcement came as U.S. President Barack Obama huddled with top military, foreign policy and national security advisers Wednesday as part of an ongoing review of U.S. strategy in Afghanistan.

The meeting, the fifth such gathering in recent weeks, came as the administration continued to weigh a call for as many as 40,000 additional troops from Gen. Stanley McChrystal, the top U.S. commander in Afghanistan.

McChrystal has said the extra manpower is necessary to implement an effective counterinsurgency strategy.

Others in the administration are advocating a different approach. Vice President Joe Biden has called for a counterterrorism strategy, which would focus on using special forces and technology to reduce the number of al Qaeda insurgents on the Afghanistan-Pakistan border.

CNN's Alan Silverleib in Washington contributed to this report.