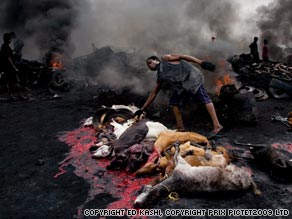 Ed Kashi has documented the impact oil has made on the Niger Delta in Africa.

The theme in 2009 is described simply as "Earth." The aim is to highlight how man exploits the planet's resources and how this impacts the landscapes and communities surrounding them.

In an extraordinary series of photos Canadian Christopher Anderson captures how the quest for raw materials affects Venezuela.

In "The Diminishing Present," Portuguese-born Edgar Martins records forest landscapes in the moments before they are engulfed by flames.

In "Curse of the Black Gold: 50 Years of Oil in the Niger Delta," Ed Kashi captures the impact of the oil industry on Nigeria's environment and people since it was first discovered five decades ago.

Kashi, an American photojournalist, spent three years compiling his photos of the Niger Delta, making a total of five trips to the troubled region.

Kashi told CNN: "It was truly one of the most graphic examples of economic inequity that I have ever seen. Especially with the backdrop of hundreds of billions of oil wealth that has been generated over the previous 50 years."

As a result of his work, Kashi says that his photos are now being used by universities and NGOs to raise awareness to try and effect change. To him, this has been one of the most gratifying and exciting by-products of his work.

One of this year's most intriguing entries is by Sammy Baloji, who superimposes colonial black and white archive photos of Belgian-run mines in the Democratic Republic of Congo and places them over his color images of the decaying mines as seen today.

Nadav Kander's images of China's Yangtze River depict communities adjusting to the changes caused by the re-routing of the country's largest river. And, Andreas Gursky has captured an extraordinary image of an ocean of rubbish at a landfill site in Mexico City.

Darren Almond's ethereal images of China's Yellow Mountain Range are made all the more magical through the knowledge that they were shot using only the light of the Moon.

All the nominees' pictures showcase the power of the camera when in the hands of master craftsmen.

Click here to view some of the short-listed images »

The winner will be announced by Prix Pictet honorary president, Kofi Annan, on October 22 at the Passage de Retz gallery in Paris. All the short-listed photos can be seen at the same gallery for one month after the award.

Further exhibitions are planned in Greece and Dubai and the Netherlands.

If you can't attend the exhibitions, there is a book entitled "Earth," published by teNeues which showcases the work of all Prix Pictet nominees.