Bomber who tried to kill Thatcher: 'Regret,' but not 'sorry'

LONDON, England (CNN) -- The IRA bomber who tried to kill Margaret Thatcher in 1984 expressed "regret" Tuesday, but refused to tell the families of most of the victims that he was sorry -- even when directly challenged to do so. 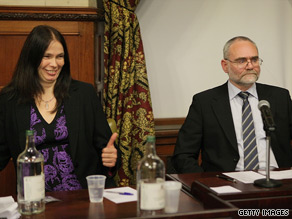 Jo Berry, left, sits next to Patrick Magee at a Forgiveness talk in Parliament on Tuesday in London.

Former Irish Republican Army activist Patrick Magee was making an unprecedented appearance in Parliament itself, sitting alongside the daughter of a man who died in the explosion.

Magee said he was sorry for killing Jo Berry's father, but would not broaden his apology.

He said many victims in Northern Ireland "have never had an expression of sorrow" from the British government, and an apology "has to cover all dimensions of the conflict."

Magee, who served 14 years in prison for the bombing, portrayed himself partly as a victim of circumstance.

"I'm sorry that I killed Jo's father," Magee said. "I wish there had been another way. ... If there were other options open, I would have jumped at them."

Pressed by lawmakers on whether he had repented, Magee said, "I don't understand repentance. I think it has a religious meaning. I can regret."

"I did what I did in full consciousness," he said. "I did what I felt needed to be done. Why do I need to ask forgiveness for that? But I can feel regret."

Magee was speaking during a public discussion with Berry, whose father, British lawmaker Sir Anthony Berry, was killed in the the Brighton bombing 25 years ago Monday.

A stocky, compact, bearded man with close-cropped salt-and-pepper hair, Magee had an air of intensity about him even as he spoke in soft, thoughtful tones.

"You can't just walk away from it -- you've done harm," he said, explaining why he felt "obliged" to speak about what he had done. "There's a political obligation ... to try and undo harm."

She appeared with Magee at conflict-resolution forums around the world, but said Tuesday's was the "most scary."

"This is where I came when I was little with my beloved Dad," she said, remembering eating with him in parliament's dining hall and seeing friends of his who still serve in the chamber.

Magee denied responsibility when he was tried for the blast, which happened on the eve of Thatcher's speech to the Conservative Party conference. She was in the hotel when the bomb went off, but was not hurt. Five people including Sir Anthony Berry were killed.

Jo Berry has been meeting Magee regularly, and appearing in public with him, since he was freed from prison under the terms of the Good Friday Agreement in 1999. By his count, the two have met 50 to 60 times.

"It's an unusual friendship," she told CNN on Tuesday before the appearance. "We don't really have the words in the English language for it. He's someone who I actually admire for his ability to engage with me even when it's difficult, and [for] his commitment to working for peace now. And yet I don't forget that he did kill my father, so it's a mixture."

Magee was scheduled to speak to CNN on Tuesday but canceled at the last minute.

Their discussion, which took place on Thatcher's 84th birthday, was organized by The Forgiveness Project, a British charity dedicated to conflict resolution. Magee and Berry appeared under the auspices of the all-party parliamentary group on conflict issues.

The director of The Forgiveness Project said she understood the event would draw a mixed response.

"I am not surprised that some have branded this a provocative stunt that will serve only to draw attention to a former IRA activist who received eight life sentences for the bombing and who has shown little remorse," Marina Cantacuzino wrote in the Times of London on Monday.

"Of all those who reside in the two chambers [of Parliament], it is Lord [Norman] Tebbit, whose wife was paralyzed in the attack, and Lord [John] Wakeham, whose wife was killed, who are likely to be the most affronted, particularly as Lord Tebbit has confessed to feeling 'some personal ill towards Mr. Magee and all of his murderous friends and employers.' "

Both Tebbit and Wakeham were members of Thatcher's Cabinet. Tebbit was trapped under rubble for several hours before firefighters were able to free him.

He told Cantacuzino that Berry's project "excuses, rewards and encourages murder," she told lawmakers on Tuesday.

She rejected his accusation, saying the group "humanizes violence" and "seeks to explain but never to justify."

The IRA waged an often-violent campaign against British rule of Northern Ireland for decades before the Good Friday Agreement. About 3,600 people died in "the troubles," as the violence is known in the province.

Berry shied away from saying she had forgiven the man who killed her father.

"Forgiveness is a word I find very difficult to use. I prefer to use the word understanding," she said.

"I have understood his life and his choices and everything that's happened to him," she said. "I know that if I'd lived his life, I don't know whether I'd make those same choices or not. And in that moment there is nothing to forgive, there is understanding and there is empathy."

But she still remembers the shock of seeing him walk free.

CNN's Paula Newton in London contributed to this report.