(CNN) -- News that U.S. President Barack Obama won the Nobel Peace Prize has been as polarizing as his embattled healthcare reform plans. 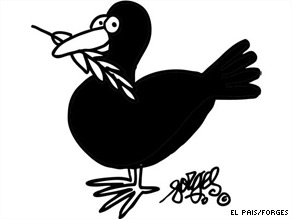 Minutes after the news broke, social networking sites such as Twitter and Facebook were flooded with comments.

Half of the trending topics on microblogging site Twitter were about the prize and the U.S. President.

Opinion was largely divided on Twitter between those who think Obama is a worthy recipient -- and those who question how he won the prize after just eight months in office.

One, jester from London, UK, wrote: "I think he should give it back until he has achieved real world peace."

A sentiment shared by mzaher from Utrecht, who said: "Dear Obama. You have my support, love and respect, I just don't think you deserve a Nobel Prize yet. If I were you, I would give it back."

However for Antwanp tweeting from Nacogdoches, USA, the news was "a great day for the United States," while kmariiezy called it a "beautiful thing."

"Wooow!! Obama wins the Nobel peaceprize. Think it's kind of early, but he is a symbol for hope, so... Congratulations!!" was gier008 from Norway's opinion.

DAPdave from Holly Springs, North Carolina, sounded a note of caution with his tweet saying: "I hope Obama proves to us all that he deserves this Nobel Peace Prize."

Equally vocal were those who did not think the U.S. President deserved the accolade, the first awarded to a White House incumbent in 90 years. iReport.com: Share your reaction to Obama's win

Ahlheid from Germany wrote: "Ridiculous! Barack Obama Wins Nobel Peace Prize. I am wondering what for? Replacing Bush? So far he has accomplished virtually nothing!"

While Michael Lipkin in Tehran, Iran, wrote: "If Obama deserves the Noble Peace Prize then so does every Miss America contestant who babbles about world peace."

Boston-based Marcela_Elisa wrote: "Can someone explain? I thought award was for accomplishments, not intentions."

Others like Mohammed, from Johannesburg, South Africa, point to the irony of awarding the peace prize to someone who is presiding over two wars in Iraq and Afghanistan. He wrote: "So Barack Obama wins Nobel prize for literature for his books and not peace - cos last I heard Afghanistan is still a war zone."

While Poipoi91, from Paris, wondered if "they couldn't find anyone else for the title."

Some users, such as nurdfighter joked that the prize is "a pathetic way of getting Obama to visit Norway."

Meanwhile kzamri writing from Kuala Lumpur, Malaysia, said: "How can Obama get the Nobel Peace Prize hours before the U.S. is supposed to bomb the Moon?!" in reference to NASA's attempt to crash a probe into the lunar surface a few hours after Obama's win.