How is the Nobel Peace Prize winner decided?

(CNN) -- Writing in his will in 1895, Alfred Nobel designated who should determine the winners of the annual prizes which he intended to be established after his death. 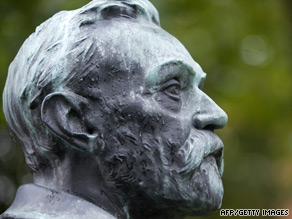 Alfred Nobel's statue in Stockholm. Nobel laid down who should nominate prizewinners in his will.

Since its inception in 1901, the winner of the Nobel Peace Prize has been chosen, in accordance with Nobel's wishes, by a five-member committee of lawmakers elected by the Norwegian parliament, the Storting, and assisted by specially-appointed expert advisers.

The 2009 committee is headed by Thorbjørn Jagland, a former Norwegian prime minister and the current president of the Storting.

The decision-making process starts in September, more than a year before the winner of the prize is announced, when the committee sends out letters to qualified individuals inviting them to nominate contenders -- either individuals, joint individuals or organizations -- for the peace prize.

Qualified individuals include members of national assemblies, governments, international courts, heads of universities and academics and previous Nobel laureates. The names of nominees and other information about the deliberation process are kept secret for 50 years. No-one can nominate themselves.

The deadline for nominations closes in February when the committee begins its work whittling scores of contenders down to a shortlist, typically of between five and 20 names.

Expert advisers are then recruited to provide additional information about the remaining candidates and evaluate their merits.

The winner of the prize is decided by a majority vote of committee members at the start of October. Unlike the other Nobel prizes, which are awarded in Stockholm, the peace prize ceremony and laureate's lecture takes place in Oslo in December.