(CNN) -- German writer Herta Mueller, whose work has dealt with the hardships and humiliations of life in an oppressive dictatorship, was awarded the Nobel prize in literature Thursday. 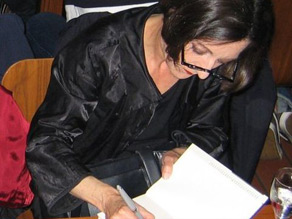 German writer Herta Mueller is only the 12th woman to win the Nobel Prize in literature.

The Romanian-born Mueller, 56, was recognized by the Swedish Academy as a writer who "with the concentration of poetry and the frankness of prose, depicts the landscape of the dispossessed."

She became only the 12th woman to win the prize since its inception in 1901.

Mueller made her writing debut at 29 after she was dismissed from her job as a translator at a machine factory. She had refused to be an informant for the secret police in Romania.

Her first book, a collection of short stories called "Niederungen," was censored in Romania upon its release in 1982.

The stories in the book and subsequent ones depict a stagnant life in a small town under a politically corrupt regime.

In "The Appointment," a woman in a clothes factory is hauled in for interrogation after she is caught sewing notes into men's suits bound for Italy, with the message "Marry Me."

In "The Land of Green Plums," the young narrator recounts a policeman who gulps down unripened plums from the city's trees, a symbol of power and greed.

Soon after she started writing, her works were panned inside Romania but positively received in the German press.

Mueller was prohibited from publishing in Romania for criticizing the dictatorship of Nicolae Ceausescu.

She was relentlessly harassed and threatened by the secret police, forcing her to emigrate to Germany in 1987 with her husband, author Richard Wagner.

As the winner, Mueller will receive 10 million Swedish crowns ($1.4 million). The award ceremony will be held in December.

The Nobel Prizes are being awarded this week and next. Awards in medicine, physics and chemistry have been handed out.

The Nobel Peace Prize winner will be named on Friday and the award in economics will be issued on October 12.