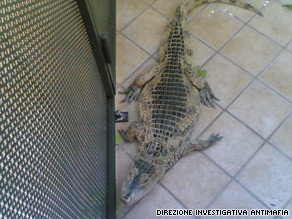 Antonio Cristofaro kept the 40-kilogram (88-pound) reptile on a terrace of his home near Naples and fed it live rats and rabbits, according to LAV, an Italian animal rights group.

Authorities discovered the animal during a search for weapons at Cristofaro's home, LAV said. The crocodile was found on September 18 but the news was only made public Wednesday, the group said.

The crocodile was 1.1 meters long (3.6 feet), the Italian Forest Service said, and was capable of pulling off a man's limb with one bite. It lived atop Cristofaro's condominium in Caserta, less than an hour northeast of Naples, the Forest Service said.

The crocodile is of a type known as a caiman, commonly found in Latin America. It is protected under the Washington Convention, which regulates the international trade of endangered animals, and is considered too dangerous to own as a pet, the Forest Service said.

Police charged Cristofaro with illegal possession of animals, ANSA said. It was not clear whether he had been arrested.

The Forest Service is now holding the reptile at an animal center near Rome, ANSA reported.

Cristofaro, who the Forest Service said comes from a mafia family, already had a criminal record for weapons-related charges, resisting police, and extortion, ANSA reported.

Authorities found a flak jacket during a search of Cristofaro's house, the Forest Service said.