(CNN) -- The decision by the United States to drop its plans to base an anti-ballistic missile defense system in Poland and the Czech Republic will have reverberations across Europe. 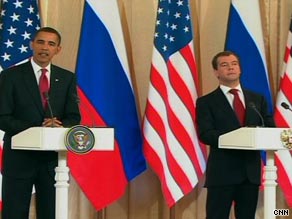 A key question is how Russia will interpret the U.S. decision to scrap its missile defense shield.

What will be seen as a totemic move by the Obama administration following its major defense review will precipitate head-scratching huddles, not just in Poland and the Czech Republic where politicians exposed themselves with their willingness to go along with domestically unpopular U.S. plans, but in the Kremlin and in NATO headquarters in Brussels.

The first obvious conclusion is that President Obama plans a much less adventurous foreign policy than his predecessor George W. Bush. Secondly, it seems that U.S. security services are toning down their predictions about Iran's nuclear capability in the near future. (The missile defense plan was supposed to have been ready for 2012).

Finally, it is clear that in difficult economic times even the superpower U.S. is having second thoughts about the expense of launching a system for which the Pentagon has yet to produce conclusive proof of workability.

The United States has long argued for the system -- which would have involved radar installations in the Czech Republic, anti-missile batteries in Poland and revamped early warning technology in northern Britain -- as a necessary protection against the nuclear missile ambitions of "rogue states" like North Korea and Iran.

See how the system would work » |

See a map of sites in Poland and the Czech Republic »

Iran's recently tested Shahab-3 missile is claimed to have a range of 2,000 km (1,240 miles), which would put parts of southern Europe in its target range.

Practical critics, however, have dismissed the missile defense project, which effectively involves hitting a bullet with a bullet at a closing speed of four miles a second, as scientifically unachievable. Their skepticism has long been shared by many European politicians who have until now kept silent because they have not wanted to undermine the strategy of their major ally.

Is the U.S. right to scrap plans for a missile defense shield in Europe? Sound Off below

The real furor, however, has been a political one. In his time as President of Russia Vladimir Putin threatened to target missiles on countries which hosted any part of the missile defense plan, angrily dismissing the U.S. insistence that the shield was purely a defensive one. He even called the move the start of a new arms race, presaging a new Cold War. Putin and his successor Dimitri Medvedev have resented the eastward progress both of NATO and the European Union. They believe that Poland and Russia's Baltic neighbors are pushing both groups into a more anti-Russian stance and they regard U.S. military installations in Poland and the Czech Republic as something which could be adapted and targeted against Moscow. Talk to Russians at any level and you will find that is more than a mere negotiating stance.

Significantly, soon after the Czech Republic signed a first stage deal to house radar installations, Russia's latest weapon in this energy-dependent age came into play. Gas supplies to Prague temporarily dropped by 40 percent after a sudden "technical difficulty" with the Druzhba (Friendship) pipeline. (Curiously , supplies to Estonia dropped too during a row over the removal of Red Army memorials).

Russian suspicions over missile defense were further aroused when Radek Sikorski, foreign minister in Donald Tusk's Civic Forum government, pushed the U.S. hard to give Warsaw an expensive new Patriot missile system as part of the deal, and last November Russia moved some of its own missiles to Kaliningrad, which borders Lithuania and Poland.

Public opinion in both Poland and the Czech Republic has been cool about the missile project, with a massive petition against it in the Czech Republic and doubts whether it could anyway achieve parliamentary ratification. There may be some relief for politicians in Prague and Warsaw that they do not have to push on with controversial plans. But their political capital has already been expended on the issue and the change of plan is not going to make them any more co-operative with the U.S. in future.

NATO chiefs too are left politically exposed. At their last two summits they have responded to U.S. urging by announcing the proposed development of a Europe-wide missile defense system after criticisms from some member countries that the U.S. system left them exposed. It is unlikely that any NATO system would go ahead without the U.S. plans so they too will have backtracking to do.

A key question now is the Russian response. Will Moscow now crow that its hardline opposition has achieved results and become even more intransigent, or will it take it as a sign that President Obama really does want a better and more relaxed relationship than in the days of Bush, Cheney and Rumsfeld and ease tensions?

America's NATO allies will also want to see spelled out now the shape of the new 'regional defense strategy' which the Pentagon is apparently planning in place of the missile defense plan. One more permanent effect of the US decision to drop the missile defense shield may be that some of the eastern European and Baltic states -- those which former U.S. Defense Secretary Donald Rumsfeld used to like to characterize as "New Europe" and which have tended to look to the US first for their defense assurances-- will now begin involving themselves more deeply with 'Old Europe' for their strategic interests.