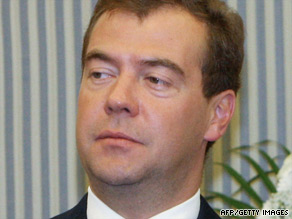 Medvedev also denied claims that he and Prime Minister Vladimir Putin are at odds over how Russia should seek entry into the WTO. He made the remarks at a meeting with members of the Valdai discussion club in Moscow.

"Had it not been for the extremely cautious U.S. policy on Russia's accession to the WTO -- or, to be frank, had it not been for blocking on the part of the U.S. -- we would have been there a long time ago," Medvedev said in the televised remarks, "and no one would now be asking questions about some supposed controversy (between Medvedev and Putin)."

The Valdai Discussion Club is an annual conference organized in 2004 by the Russian news and Information Agency "RAI Novosti", along with the Council on Foreign and Defence Policy and Russia Profile magazine.

The event is meant to draw together leading foreign experts and journalists and is regarded largely as a media event which generally forecasts Russia's domestic and foreign policies.

Medvedev also said that, after Russia, Belarus and Kazakhstan decided to seek entry to the WTO together as Customs Union members, "rumors began that the president and the premier hold differing points of view on this issue."

"That is a mistake. It has been decided in what way we will seek accession. We will do so together, and if this doesn't work we will seek accession separately," he said. "But we have come to a decision with our partners to agree our basic terms in advance, and that is the direction we will be moving in."

Russia has been negotiating its accession into the WTO since 1993 but various issues including enforcement of copyright laws and meat exports have halted the country's acceptance in the past.

The WTO is the only global international organization dealing with the rules of trade between nations, according to its Web site. It is aimed at helping producers of goods and services, exporters and importers conduct their business, the site says.

There are currently 153 member states in the organization. Russia is the world's largest economy that still not a member state.