MOSCOW, Russia (CNN) -- Families and friends of the more than 300 people killed in Russia's worst school massacre marked the fifth anniversary of the tragedy Tuesday. 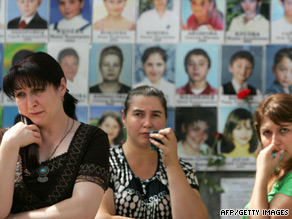 Mourners visit the Beslan school gymnasium on the fifth anniversary of the massacre.

At exactly 9:15 a.m., a bell rang out over the city of Beslan and the remnants of School Number 1, where 32 heavily armed militants took more than 1,200 people -- children, parents and teachers -- hostage on the first day of school in 2004.

Russian television showed hundreds of people lined up at the school's gymnasium, where the hostages were herded.

They brought flowers, toys and water bottles -- symbolizing the water the captives were denied. Dozens of pictures of slain pupils lined the walls.

The militants demanded that Russia withdraw from the breakaway republic of Chechnya.

For three days, the world watched as Russian special forces took up positions around the school and town, and parents of students inside the building waited behind barricades, hopeful for a happy ending to the ordeal.

But for many, there was none. Five years later, criticism still swirls about how the government has handled the investigation of the attack.

Officials say a militant set off a bomb on the third day of the siege, prompting special forces to respond with a barrage of gunfire. Killed in the crossfire were 334 people -- more than 180 of them children.

However, some relatives of the victims, as well as human rights organizations, say the bloodshed began with a government sniper firing at a militant.

The only known attacker to survive was Nur-Pashi Kulayev, who was sentenced to life in prison in 2006.

In an address Tuesday marking the first day of the school year, Russian President Dmitry Medvedev made no mention of the Beslan massacre. Just one more sign, critics say, that the government has left the tragedy in the past.

Coverage of the anniversary was also overshadowed by media attention to the 70th anniversary of the beginning of World War II.

But relatives of the Beslan massacre victims are still searching for answers, and asking if anything has changed in the still-restive North Caucuses.

All About Russia • Chechnya • Beslan