(CNN) -- The only man convicted over the Lockerbie bombing is to be released and allowed to return to Libya on compassionate grounds because he is terminally ill, Scotland's justice minister said Thursday. 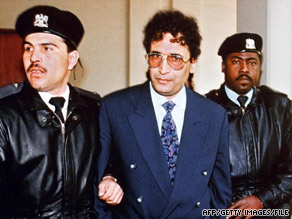 Abdelbeset Ali Mohmed al Megrahi 57 was serving a life sentence for bombing Pan Am Flight 103 over the Scottish town of Lockerbie, resulting in the deaths of 270 people.

The White House, which has urged Britain to keep al Megrahi behind bars, said it "deeply regrets" the decision.

Scottish Justice Secretary Kenny MacAskill told a news conference in Edinburgh the prisoner was "going home to die" and would be released within an hour of the announcement shortly after 1200 GMT (8 a.m. ET).

The Pan Am flight exploded December 21, 1988, as it flew over Scotland on its way from London to New York. All 259 people aboard the plane died, along with 11 Scots on the ground.

Families of the Lockerbie victims have been divided on whether al Megrahi should be ever be released.

The United States has made clear to the British government and others that it believes al Megrahi should spend the rest of his time in jail.

In a statement released shortly after Thursday's announcement, the White House said it "deeply regrets the decision".

"As we have expressed repeatedly to officials of the government of the United Kingdom and to Scottish authorities, we continue to believe that al Megrahi should serve out his sentence in Scotland," it said.

Al Megrahi was convicted in 2001 after the prosecution argued he had placed the bomb, hidden in a suitcase, on a flight from Malta to Frankfurt, Germany.

There, prosecutors said, the bomb was transferred onto the Pan Am plane that went first to London's Heathrow Airport and then took off for New York.

The prosecution said that al Megrahi, who worked at Malta's Luqa Airport, was an agent for the Libyan intelligence services and had been seen buying clothes that were in the suitcase that contained the bomb.

A Scottish court ruled in 2003 that al Megrahi must serve at least 27 years of his sentence before becoming eligible for parole. Al Megrahi first appealed the conviction in 2002 and lost.