MOSCOW, Russia (CNN) -- As many as 62 workers are still missing Tuesday, a day after an explosion at Russia's largest hydroelectric plant killed 12 people, a government official said. 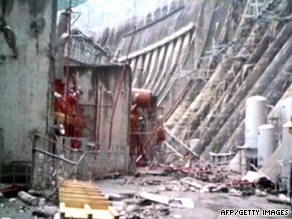 Russia television showed pictures of the aftermath of the explosion.

At least 25 rescue teams, as well as a special police force and special rapid response detachments, were working to find the missing employees, according to Viktor Zimin, governor of the Khakassia region.

Fourteen other workers were injured in the incident, Shoigu said, which caused a major power disruption in the area and as far as 600 miles away in the city of Tomsk and the mining area of Kuzbass.

A spokesman for RusHydro, which owns the hydroelectric plant, told CNN Tuesday that it's now believed a broken turbine caused the pipes to burst, and not a change in water pressure as was thought Monday.

Russian Federal investigators previously said a transformer exploded after a sudden change in water pressure caused a pipe to burst during repair work, flooding the engine room where turbines are located and destroying walls and ceiling. It's now believed the turbine problem caused the pipes to burst, leading to the transformer explosion.

The 30-year-old turbine was built by the Leningrad Metals Plant, officials said.

The plant's dam was not damaged in the explosion, and the accident posed no threat to towns further south along the Yenisei River.

The incident did cause a three-mile oil slick in the river, raising initial concerns about major environmental damage. But the oil was contained to one area where clean-up crews worked to mop it up.

All About Russia • Siberia