Calling all witches: Cave in need of new hag

By Reed Langton-Yanowitz
For CNN 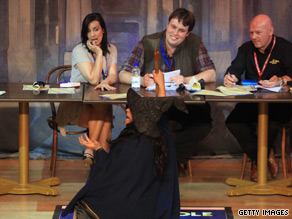 Aspiring witches audition for the job Tuesday at Wookey Hole Caves in England.

Applicants are flocking to the town of Wells in Somerset Tuesday in the hopes of being selected as the caves' new resident witch.

With the promise of £50,000 ($82,000) per year, and a spacious cave to boot, more than 2,000 candidates are stashing their wart remover and grabbing their broomsticks to persuade a panel of judges to choose them.

The winner will portray the notorious witch that is said to have haunted the caves in the Dark Ages. The witch lived in the cave with goats until an abbot threw holy water on her, turning her to stone, legend says.

Locals say her frozen figure can still be seen in the caves today.

Legend has it that the witch cursed crops, caused disease and soured milk in the area, audition organizers say.

Today, the caves at Wookey Hole are part of a tourist attraction with rides, a circus, theme parks and restaurants. The company that runs it, Wookey Hole Ltd., pays the witch's salary on a year-long contract.

The would-be witches have one minute to perform for the panel Tuesday, employing their best cackle and whatever props they can carry, organizers say.

The position won't necessarily go to a woman; male and transgender witches are also invited to apply. Applicants are told they must, however, be knowledgeable in the history of witchcraft, be willing to travel, sleep overnight in caves, and cannot be allergic to cats.

Organizers say they've had applications from men, women and 230 mothers-in-law.