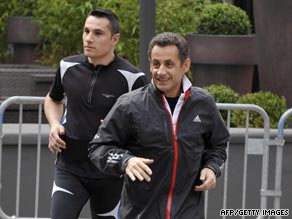 He did not lose consciousness, and initial tests showed nothing abnormal, said a statement released by the president's office. His heart will be monitored until Monday morning, which is standard procedure in such cases, the statement said.

In the meantime, according to the statement, he is resting and keeping in touch with his advisers.

Sarkozy, 54, had been jogging with bodyguards for about 45 minutes near the Elysee Palace, the official residence of the president, when he fell ill, the statement said. After being seen by the Elysee doctor, Sarkozy was taken by helicopter to the military hospital Val-de-Grace.

No further announcement was expected until morning, the statement said.

Sarkozy exercises regularly and is an avid jogger. Earlier this month, he was photographed jogging through Central Park in New York during his trip to the United States.

All About Nicolas Sarkozy