(CNN) -- A U.N. tribunal convicted two Serb cousins Monday of having burned alive more than 100 Muslims in what the presiding judge called a part of the "wretched history of man's inhumanity to man." 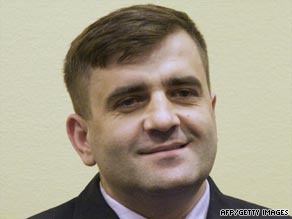 Serb Milan Lukic has been found guilty of burning alive more than 100 Muslims.

Milan Lukic and Sredoje Lukic were convicted of crimes dating back to the early 1990s, during the bitter ethnic conflict that ravaged the former Yugoslavia.

Milan Lukic organized a group of local paramilitaries with ties to police and the military, sometimes referred to as the "White Eagles" or "Avengers," according to an indictment. Before and during the war, his cousin Sredoje Lukic worked as a policeman before joining the group.

The crimes include two incidents in which Muslim men, women and children were forced into homes that were then set on fire -- and some who tried to escape were shot.

Milan Lukic was found "guilty of persecutions, murder, extermination, cruel treatment and inhumane acts, as crimes against humanity and war crimes, in relation to six discrete incidents," the International Criminal Tribunal for the former Yugoslavia (ICTY) at the Hague said. He was sentenced to life in prison.

Sredoje Lukic was found guilty of "aiding and abetting the commission of the crime of persecutions inhumane acts, murder and cruel treatment." He was sentenced to 30 years in prison.

Their crimes were committed during the 1990s. Bosnia-Herzegovina seceded from Yugoslavia in 1992 and Radovan Karadzic declared himself president of a Bosnian Serb republic.

The Bosnian Serbs, backed by the Serb-dominated Yugoslav military and paramilitary forces, quickly seized control of most of the country and laid siege to Sarajevo, the capital. During the conflict that followed, the Serb forces launched what they called the "ethnic cleansing" of the territories under their control -- the forced displacement and killings of Muslims and Croats.

The cousins' cases are a small part of the caseload the Tribunal has dealt with regarding violations of humanitarian law committed in the former Yugoslavia between 1991 and 2001.

Since its creation the Tribunal has indicted 161 people on charges of serious violations of humanitarian law.

The court found Milan Lukic responsible for the murder of 59 Muslim women, children and elderly men in a house in the town of Visegrad. "On 14 June 1992, the victims were locked into one room of the house which was then set on fire," the tribunal wrote. "Milan Lukic was found to have placed the explosive device into the room, which set the house ablaze. Milan Lukic shot at people trying to escape from the burning house."

Sredoje Lukic "knew what would happen to the victims that he helped herd" into the home, the court wrote in its judgment.

Milan Lukic was also found guilty of the murder of at least 60 Muslim civilians in another house in Visegrad later that same month. The court found that he and others "forced the civilians inside the house, blocked all exits and threw in several explosive devices and petrol, setting the house on fire."

In all, the court found that Milan Lukic "personally killed at least 132 Muslim people."

The defense for both men denied the accusations against them, but the evidence demonstrated their guilt, the court said in its judgment.

"The perpetration by Milan Lukic and Sredoje Lukic of crimes in this case is characterized by a callous and vicious disregard for human life," presiding judge Patrick Robinson said.

"In the all too long, sad and wretched history of man's inhumanity to man, the Pionirska street and Bikavac fires must rank high.

"At the close of the twentieth century, a century marked by war and bloodshed on a colossal scale, these horrific events stand out for the viciousness of the incendiary attack, for the obvious premeditation and calculation that defined it, for the sheer callousness and brutality of herding, trapping and locking the victims in the two houses, thereby rendering them helpless in the ensuing inferno, and for the degree of pain and suffering inflicted on the victims as they were burnt alive."