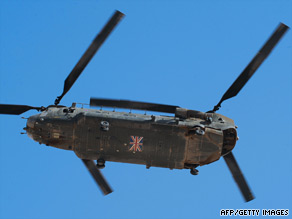 Britain's opposition leader said only 30 of the UK military's 500 helicopters are being used in Afghanistan.

Speaking the day after eight British soldiers killed in Afghanistan were laid to rest, Brown also defended the volume of equipment -- specifically helicopters -- supplied to troops in Afghanistan.

Conservative Party leader David Cameron said the number of helicopters in Afghanistan is "simply insufficient" and is "the basic problem" facing British troops there.

"He is right to raise issues of equipment so that I can assure him we are doing everything we can," Brown said at his weekly question time in the House of Commons.

The number of helicopters in Afghanistan has gone up by 60 percent over the past two years, Brown said. The British government is also spending £6 billion ($9.87 billion) over the next 10 years to improve military helicopters, he said.

"We have done everything we can to increase the number of helicopters," Brown said.

Cameron said that of the military's 500 helicopters, only 30 are being used in Afghanistan. At the same time, the number of British troops in Afghanistan has increased to 9,000, Brown said.

The eight soldiers laid to rest Tuesday were killed in four separate incidents in a 24-hour period last week. Their deaths bring to 15 the number of British troops killed in Afghanistan so far this month -- a relatively high toll that has raised questions at home about the legitimacy of the war.

Cameron said the government needs a "tighter definition" of the mission there and needs to show "greater urgency and more visible progress" in order to sustain public support.

"The purpose of our mission is very clear," Brown said in response. "It is to prevent terrorism coming to the streets of Britain."

A current operation, Operation Panther's Claw, is designed to flush out the Taliban from certain areas ahead of the Afghan elections next month. Brown said Afghan President Hamid Karzai had promised to provide his own troops and police to that operation.

After the elections, the focus will shift toward mentoring and training Afghan security services, Brown said.

Two other soldiers, who were in the vehicle, were injured and were being treated at the military field hospital in the city of Mazar-e Sharif, said NATO's International Security Assistance Force.

No civilians were involved. The military did not release the nationalities of the soldiers or any other details of the accident.