MOSCOW, Russia (CNN) -- They headed to the U.S. Embassy in Moscow after news broke that Michael Jackson had died. And they're still coming. 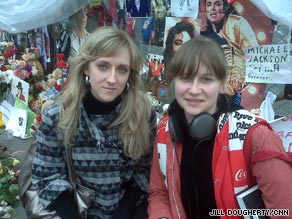 Young Russian fans, some of whom don't even speak English, bring homemade signs, pictures and drawings of Jackson, Russian religious icons, candles, teddy bears -- all signs of how much they loved the singer.

"At first I couldn't believe it had happened," 23-year-old Zhenya Iordanskaya said. "I thought it was another rumor. My friend told me about it, and then I saw it on TV, on every channel. I was really in shock. And I still can't believe it."

Iordanskaya was standing in the rain Sunday with her friend Alexandra Belayeva, 20, looking at the shrine Jackson's fans have erected along the fence in front of the Embassy.

Iordanskaya says she was 8 when she first heard "Black or White."

"I didn't understand English, but the faces of all the different people really inspired me. And the fact that he dealt with all these issues, you really have to give him credit for that," Iordanskaya said.

Belayeva says she became a fan about three years ago.

Join CNN for all-day coverage Tuesday as the world celebrates the life of a worldwide pop icon, and don't miss our prime-time coverage starting at 8 p.m. ET.

"The way he lived his creative live really inspired me," she said. "I really got into him as a person. Because you can really see the soul of a person in their creativity, can't you? It was such a shame that people put him down so much."

Belayeva says she's still in shock over Jackson's death at his California home on June 25. "When I heard he had died, I really couldn't believe it. He was so close to us. Not one of us, but so close. He was unbelievably kind.

"It's so sad to lose a person like him. It's also so sad that he was so alone at the end of his life. People didn't understand him. But at least they recognized his genius during his life. Sometimes that doesn't happen."

Iordanskaya and Belayeva love to dance, and when they saw "Dangerous," they knew they had to try it out. "We studied his moves in that for days! We practiced. We really loved it!"

I ask the women to name their favorite Jackson songs. They roll their eyes. Where do you start? Iordanskaya starts with "Liberian Girl." "Also 'Earth Song.' "

"It's really powerful," she said, "the energy and the lyrics!"

On a rainy, cold day in Moscow, Iordanskaya and Belayeva say they still cry thinking that Jackson is no longer on Earth.