ROME, Italy (CNN) -- Scientific tests prove bones housed in the Basilica of St. Paul in Rome are those of the apostle St. Paul himself, according to Pope Benedict XVI. 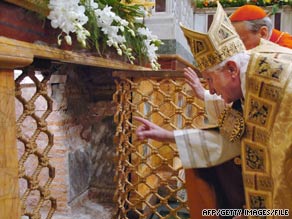 Pope Benedict XVI looks at the tomb of St. Paul at the Basilica of St. Paul in Rome in 2007.

"Tiny fragments of bone" in the sarcophagus were subjected to carbon dating, showing they "belong to someone who lived in the first or second century," the pope said in a homily carried on Italian television.

"This seems to confirm the unanimous and undisputed tradition that these are the mortal remains of the Apostle St. Paul," Benedict said in Sunday's announcement.

The tomb also holds "traces of a precious linen cloth, purple in color and laminated with pure gold, and a blue colored textile with linen filaments," the pope said.

The tests were carried out by inserting a probe into a small opening in the sarcophagus, "which had not been opened for many centuries," the pontiff said. The probe "also revealed the presence of grains of red incense and traces of protein and limestone."

Separately, archaeologists have uncovered an image of St. Paul which "could be considered the oldest icon of the apostle known to date," the Vatican's official newspaper reported Sunday.

The painting, in the St. Tecla Catacomb, is "among the oldest and best-defined figures from ancient Christianity," according to the Pontifical Commission for Sacred Archaeology, L'Osservatore Romano reported.

St. Paul is one of the most significant figures in Christianity. Originally a persecutor of early Christians, he became a follower of Jesus after seeing a vision on the road to Damascus, according to Christian tradition.

"Saul, Saul, why are you persecuting me?" the vision of Jesus asks Paul, using the apostle's birth name, in the Acts of the Apostles.

Saul then took the name Paul and became a missionary. His letters, or epistles, to early Christian communities around the Mediterranean form a significant portion of the New Testament.

Paul was beheaded by Roman authorities sometime between 65 and 67 A.D., according to the Catholic Church.

He was buried a few miles away, and when the Roman Empire stopped persecuting Christians some 250 years later, the Emperor Constantine had a basilica built over his grave.

It currently lies under a marble tombstone bearing the Latin inscription PAULO APOSTOLO MART (Apostle Paul, martyr), according to the Web site of the basilica. A papal altar stands over the tombstone, which is visible through a window-like opening, the Web site says.

Monday marks the end of a year of celebration in honor of the 2,000th anniversary of St. Paul's birth. It also happens to be the feast day of Saints Peter and Paul.