(CNN) -- Search crews have recovered the bodies of the flight captain and a steward from the Air France flight that crashed off the coast of Brazil. 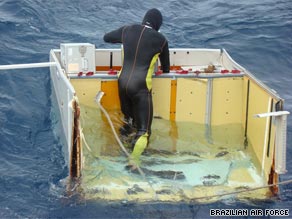 A Brazilian diver floats on wreckage of Flight 447 earlier this month. The search for more debris continues.

The two flight members are among the victims that have been identified, Air France said in a statement Thursday.

About a dozen victims have been identified among roughly 50 bodies recovered from the crash of Flight 447, which killed 228 people on June 1, authorities in Brazil said this week.

Crews continue to search for bodies, wreckage and flight-data recorders that apparently rest deep on the ocean floor. Data from the recorders may be crucial in helping investigators determine what caused the plane to crash.

Autopsies conducted on some of the 50 bodies found so far show they suffered broken bones, including arms, legs and hips, Brazilian authorities have told French investigators, according to Paul-Louis Arslanian, head of the French accident investigation board.

Such injuries suggest that the plane broke apart in midair, experts have said.

Asked about that theory, Air France Chief Executive Pierre-Henri Gourgeon told France's RTL radio this week that he would not go that far.

Searchers have found dozens of pieces of debris in the water and think they know the general location of the wreck, but Arslanian said this week that there is a chance the entire aircraft may never be found.

Air France plans to pay relatives of the victims an initial compensation equivalent to about $24,500, or 17,500 euros, for each victim, Gourgeon has said.

"The modern world is different and we often have only a cell phone, and as you can imagine, this cell phone is unfortunately in the aircraft," Gourgeon said. "So we probably (will put in) more hours to access all the relatives."

The were 32 different nationalities present on Flight 447.