PARIS, France (CNN) -- A Pablo Picasso sketchbook with 33 pencil drawings disappeared from a locked glass case in a museum in Paris overnight, the French Ministry of Culture announced Tuesday. 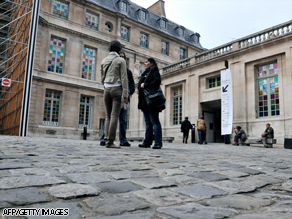 The sketchbook was discovered missing from the Picasso Museum in Paris overnight.

The police were immediately alerted, as was a special unit that combats the trade in stolen cultural artifacts.

The sketchbook has a red varnished cover with the word "Album" inscribed on it in gold lettering, and measures 16 centimeters by 24 centimeters (6 inches by 9 inches).

The period was extraordinarily eventful for the artist, including collaborations and tours with the Ballets Russes, his marriage to Olga Khokhlova, a dancer from the company, and the birth of his son Paul.

Picasso was shifting from the famous Cubist style he helped create to his neo-Classical phase during the years covered by the sketchbook, according a biography on his official Web site.

All About Pablo Picasso • Crime • Paris