COLLEVILLE-SUR-MER, France (CNN) -- World leaders gave thanks Saturday to military veterans for their efforts in the D-Day landings of 65 years ago at a ceremony in northwest France, warning that their legacy must not be forgotten as the world faces renewed threats of tyranny. 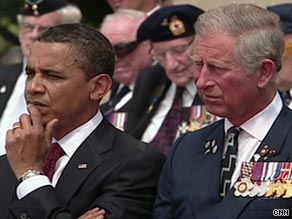 President Obama and Britain's Prince Charles were among those attending the ceremony.

More than 150,000 allied troops, about half of them Americans, took part in D-Day on June 6, 1944, overwhelming German forces in an operation that proved a turning point in driving the Nazis out of France.

Allied forces secured the beaches at a cost of about 10,000 casualties in what was the first step in a campaign that would, in a matter of weeks, liberate Paris, which had been under Nazi occupation for more than four years.

Brown praised those who fought on that day, saying, "as long as freedom lives, their deeds will never die."

He said their sacrifices had put obligations on people living today in what he called "the great covenant of D-Day.

"We must be as if liberators for our day and our generation too," he said, citing Burma (renamed Myanmar) and Zimbabwe, as well as the "mortal threat of poverty, hunger, illiteracy, disease and want."

Obama addressed the 288 veterans said to be attending the ceremony, telling them: "You are why we keep coming back."

He urged the world to remember what happened at nearby Omaha Beach, one of the main landing points for U.S. troops involved in the operation.

"Friends and veterans, what we cannot forget -- what we must not forget -- is that D-Day was a time and a place where the bravery and selflessness of a few was able to change the course of an entire century."

Sarkozy described the horrors of the battle, where so many died before they were able to land that "those who did make it ashore waded through the bodies of the dead and wounded that floated in on the tide."

He cited a letter from a U.S. soldier who said the day "was like a waking nightmare. The ground was so strewn with bodies that you could practically cross the beach without touching the sand."

The speeches were followed by a 21-gun salute, a lone trumpter playing taps and a flyover by American, British and French jets.

Among veterans attending Saturday's remembrance ceremonies will be 86-year-old former British soldier Jim Tuckwell, who said the events will help those present to remember fallen comrades lost in the heat of battle.

"And the worst thing about later battles was that when you lost people, you normally had to bury them yourself. You couldn't leave the bodies on the ground, there was nowhere else to put them."