LONDON, England (CNN) -- A British woman and her boyfriend were sentenced to prison Friday in the violent death of the woman's 17-month-old son, who came to be known as "Baby P" in a case that sparked a furor in Britain. 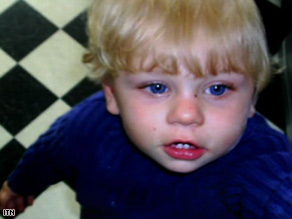 The identity of Peter had been revealed only as "Baby P" until a court order was lifted recently.

Sentencing the mother to a minimum of five years in prison for her role in her toddler's horrific death, Judge Stephen Kramer called the woman "manipulative and self-centered."

She and her boyfriend, both of whom cannot be identified for legal reasons, were found guilty of causing the death of the child.

The mother's sentence is indefinite, but she will serve at least five years. Her boyfriend, who was also found guilty of raping a 2-year-old girl, will given a life sentence, with a minimum of 12 years, for the death of Baby P and the rape of the other child.

Witnesses said neither showed emotion when the verdict was read.

The death of Baby P -- whose real name, Peter, was not used until the recent lifting of a court order -- evoked an outcry in Britain, with the public, the media and politicians demanding to know how social workers and others missed the boy's massive injuries.

And many outside the courtroom on Friday were not happy with what they said was a lenient sentence for the mother and her boyfriend.

Baby P was found in a blood-spattered cot in August 2007, with more than 50 injuries, including a broken back and fractured ribs.

"Any decent person who heard the catalogue of medical conditions and non-accidental injuries suffered by Peter cannot fail to have been appalled," Kramer said.

The blonde, blue-eyed toddler had been on a child protection watchlist and was visited dozens of times by social workers.

The head of the local children's services, Sharon Shoesmith, initially denied responsibility, but has been fired. She is appealing the decision.

The social worker in charge of Baby P's case has also been fired.

And the doctor who last saw Baby P and failed to diagnose his broken back and fractured ribs has been dismissed and is no longer able to practice medicine without supervision.

Watch reactions of protesters outside the courthouse »

"There was clear evidence to the professionals of harm to the child and they didn't put the best interests of Baby Peter first; they were too inclined to protect the rights of the mother to keep the family together. That was unacceptable," he said.

Claire Kober, the head of Haringey Council, which runs the local children's services, said in a statement that the agency accepted that "things went badly wrong with our child protection services in 2007."

The government review "clearly shows there were failings by all the agencies involved with Baby Peter. There were opportunities to help this family which should have been taken," Kober said.

"I apologize for those failings."

She said the council is bringing about "major changes and improvements" to child protection.

Graham Badman, the chairman of Haringey Local Safeguarding Children Board, which conducted the review, said: "I believe the most important lesson arising from this case is that professionals charged with ensuring child safety must be deeply skeptical of any explanations, justifications or excuses they may hear in connection with the apparent maltreatment of children.

"Baby Peter deserved better from the services that were supposed to protect him," Badman said.