LONDON, England (CNN) -- Charging chesty women more for their bras doesn't win a lot of support, British retailer Marks & Spencer acknowledged Friday as it announced an end to the surcharge on its larger lingerie. 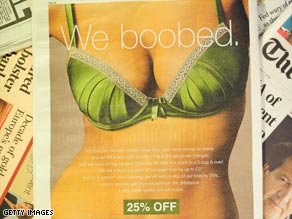 Marks & Spencer gave in to campaigners who argued that the higher prices of the bigger bras was unfair. The retailer charged as much as £2 ($3) more for all sizes DD and up.

"It's true that our fantastic quality larger bras cost more money to make, and we felt it was right to reflect this in the prices we charged," the ad said. "Well, we were wrong."

It follows a nearly year-long campaign by members of the Facebook group Busts 4 Justice.

"We would like to thank everyone who has supported us on this issue; especially the thousands of brilliant, busty women that have joined forces with us. We couldn't have done this without you," the two administrators of the group, Becky Mount and Beckie Williams, posted Friday on Facebook.

"Busts 4 Justice remain committed to making things better for busty women on the high street, but for now we're happy just to be able to encourage all ladies to reward themselves and their boobs with some properly fitted, fairly priced lingerie."

Marks & Spencer is a stalwart British chain, known for classic wardrobe staples and low prices. Its underwear department is the first stop for many British shoppers and is especially famous for reliable basics.

And to give customers an added lift, Marks & Spencer also announced it is cutting the prices of all of its bras by 25 percent for the rest of May.

"I think even though we all obviously held a bit of a grudge against buying our bras from M&S we should really be grateful they got rid of the surcharge and have given us the super generous 25 percent off," Mount wrote on the group's site Friday. "They may get cleared out by the time the weekend is over!"