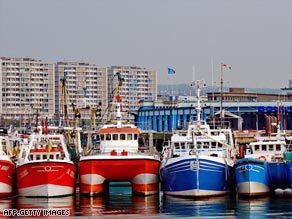 The French ports of Calais, Dunkirk and Boulogne were open again after French unions met Thursday and agreed to stop the blockade.

Union leaders have yet to agree on how the rest of their protest will develop, and whether the suspension will become permanent.

The fishermen began their blockade of the three ports Tuesday to protest European Union fishing quotas, which they say threaten their livelihoods.

The flotillas forced a halt to all cross-Channel traffic, including passenger ferries and freighters, stranding tourists on both sides of the waterway and causing a backlog of freight trucks.

P&O, the largest ferry operator on the Channel, said it had resumed running normal services to Calais.

"It is our hope that we'll be able to continue doing that throughout the day," spokeswoman Michelle Ulyatt said.

LD Ferries, which operates services to Boulogne, said it had canceled four sailings Thursday as a result of the dispute.

"We do not yet have any information on whether any of our services will be affected beyond 16th April," the company said in a statement.

Both France and the European Union have ruled out any renegotiation, pointing out that French cod quotas have already been raised 30 percent since 2008, AFP said.