(CNN) -- Italian Prime Minister Silvio Berlusconi's energetic response to Monday's earthquake has been generally praised despite his comparison of the ordeal of survivors staying in emergency tents to a camping weekend. 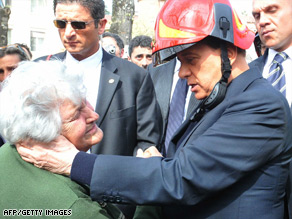 An elderly local resident bursts into tears during a visit by Silvio Berlusconi, wearing a fireman's helmet.

Berlusconi has visited the town of L'Aquila, the epicenter of the 6.3-magnitude quake, every day this week, talking to survivors and pledging government help to rebuild houses. He scrapped a visit to Russia that was planned for this week.

The PM has even been greeted with applause on occasions, according to CNN correspondent Paula Newton, who interviewed him on Wednesday.

"He was very tired when I saw him, you could tell he hadn't had much sleep," Newton said.

"In general he thrives on these events and politically it will probably give him a boost, if only temporarily."

However, she added that his visit to a dormitory where students were buried under rubble had upset some of the parents and relatives. "They were kept well back and he did not meet with them," she said.

Watch Berlusconi talk about the disaster »

"One relative, in obvious anger, asked another 'why is he here?' and another replied "he's taking care of elections, of course."

And true to form Berlusconi has been unable to avoid putting his foot in it. During a visit to one tent village where thousands who had lost their houses were staying, Berlusconi told German television "they should see it like a weekend of camping."

The trademark gaffe sparked predictable outrage. "He is a completely insensitive man who thinks wisecracks can solve every problem," Rina Gagliardi, a former senator of the Refoundation Communist Party, told Agence France-Presse.

Berlusconi is of course renowned for such off-the-cuff remarks. In November he described Obama as "handsome and suntanned."

He was also forced to issue an apology to his wife, Veronica Lario, in 2007 after she read reports of him approaching several women at an awards dinner and declaring: "If I wasn't married, I would marry you straight away."

Lario received the apology after sending a letter criticizing her husband to a newspaper in which she said his behavior was "unacceptable" and "damaging to my dignity."

Despite the most recent criticism, Berlusconi has won praise from the media for his limelight-hogging visits to the region. People in the temporary camps also say they are being well looked after by the authorities although they are desperate to collect their own things from their homes.

In his interview with CNN on Wednesday Berlusconi said every effort was being made to assess which houses were safe to enter.

"This is an aerial view of Onno, and you can see, unfortunately, how the town has been totally destroyed," the prime minister told CNN. "Here, we can go into greater detail and concentrate on individual houses. This helps us to assess the damage right away and tells us how much it will cost to rebuild."

The Italian government has said it will cost 1.3 billion euros (1.7 billion dollars) to repair or rebuild about 10,000 buildings damaged in the quake.

"We have the plans for reconstruction and intend to start immediately with the building projects," Berlusconi told CNN.

"We will build a new town near the capital, L'Aquila, and keep the possibility open for many families to stay, for the time being, in hotels along the coast, less than a hour away, in pleasant and comfortable circumstances."