Italy quake worker: 'It's hard to deal with'

L'AQUILA, Italy (CNN) -- An emergency worker fought back tears amid the rubble of Italy's deadliest earthquake in decades. Helicopters buzzed overhead, and sirens echoed across the region. 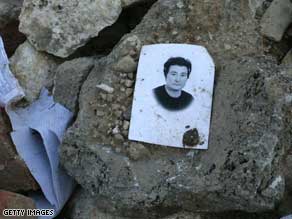 Signs of tragedy are evident across the region. This picture was amid the rubble in the town of Onna.

"It's my people. It's really hard to deal with," said Dr. Emanuela Troiani Sevi, who has been working around the clock at makeshift hospitals in her hometown of L'Aquila ever since the quake struck.

"There are a lot of dead and seriously wounded."

Across town, parents anxiously awaited any word on their children buried amid a mountain of twisted concrete at a student dormitory.

A body was pulled from the rubble early Tuesday. Emergency crews covered the body with a white blanket and took it away as onlookers wept.

"It's a horrible situation here with the parents of the students that are buried under the rubble," Mayor Massimo Cialente said.

L'Aquila is a medieval city about 120 km (75 miles) northeast of Rome.

"I can say there's hardly a building that was left without some sign of what has happened in the historical center of L'Aquila," Italian Prime Minister Silvio Berlusconi said. "All the public buildings have been affected."

The city's modern hospital was so severely damaged in Monday's 6.3-magnitude quake that it's been deemed too unstructurally sound to house anybody.

Two field hospitals were set up to treat the injured. Sevi said emergency workers were trying to stabilize the patients at those sites before sending them to nearby hospitals in the country's Abruzzo region. The most critical patients, she said, were being airlifted out.

"Yesterday was the worst," she said.

Corrado Ficorella was an oncologist in the cancer ward at the badly damaged San Salvatore hospital.

"It's terrible. It's incredible. I think that somebody has some responsibility," he said of why the decade-old building didn't survive.

The quake killed 235 people and injured about 1,000 others. Fifteen people remain missing, according to Berlusconi.

Aftershocks rumbled across the region for much of the day, including a strong 5.6-magnitude quake Tuesday evening.

See the epicenter of Monday's quake »

"Right now everyone's just standing, wondering whether to go back into those buildings, whether another one will come soon. All those questions come into our minds," CNN's Diana Magnay said.

"The mood is a little bit afraid," said Marco Volponi of Italy's Civil Protection agency. He was working in a tent camp, housing people whose homes were inhabitable.

"I hope they will not be here longer than two weeks," Volponi said.

About 4,000 people were working on the rescue effort, clearing debris and searching for any signs of survivors. Civil defense officials said they are prepared to house up to 30,000 people, but many of those displaced have gone to hotels.

Officials urged residents to keep away from their homes. Thousands have sought shelter in tents. Others slept in cars or relatives' homes.

In one of the makeshift emergency rooms, elderly victims, crippled with pain, were hardly conscious of the fact they survived. Emergency worker Mario Caroli said it took three hours to set up the tent-like emergency room, equipped with high-tech medical equipment.

Nearby, the town of Onna lost about 40 residents, or more than 10 percent of its 350 people. Nearly every building was destroyed or damaged.

Earlier in the day, Berlusconi pledged to build a new town to house the thousands of people left homeless by Monday's deadly earthquake. The Italian premier said a special fund would be set up to help victims rebuild their lives.

"The government has a task to be close to all those citizens who have found themselves in a very difficult situation due to the earthquake, the disaster and of course also due to the financial crisis," Berlusconi said.

He said a study is "well under way" into plans for the town. The government will set up a special fund in banks to allow for low-cost mortgages for homebuyers in the new town, he said.

"It will be very important, and we will collect together all the necessary money and funds as soon as possible to rebuild, once we overcome any bureaucratic paperwork and issues," Berlusconi said.

"Building will be carried out as soon as possible -- fast."

The magnitude-6.3 quake is the deadliest to strike Italy in decades and the first major one to strike the country in almost seven years. It left stone buildings in heaps, with rubble spilling over parked cars and into alleyways.

Berlusconi declared a state of emergency and canceled a trip to Russia to oversee the rescue efforts.

The predawn earthquake came less than six hours after another quake hit the northern part of the country, the U.S. Geological Survey reported.

Seismic activity is not uncommon in Italy, which is sandwiched between the European and African tectonic plates, and USGS geophysicist Amy Vaughan called the region geographically "complex."