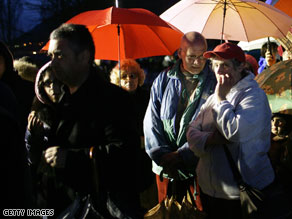 Tearful survivors, many of them clad in pajamas and blankets, watched as bodies were pulled from the rubble in the medieval city of L'Aquila, about 120 km (75 miles) northeast of Rome. The quake killed more than 150 people, L'Aquila's fire department said late Monday.

Nearly 24 hours after the quake hit, authorities were still unsure how many people remained trapped in the wreckage.

"We think maybe 70 to 100," said Francesco Rocca, a spokesman for the Italian Red Cross. "We still don't know the exact number. This is why we are still working very, very hard at the moment."

Another body was found in the rubble of a student dormitory early Tuesday morning, and at least five other students were believed inside. But aftershocks hindered rescuers early Tuesday, and they have asked for additional equipment and expertise from Rome, authorities at the scene told CNN.

"I can say there's hardly a building which was left without some sign of what has happened in the historical center of L'Aquila," Prime Minister Silvio Berlusconi said during a visit to the stricken region. "All the public buildings have been affected."

Berlusconi said 4,000 people were working on the rescue effort. Civil defense officials said they are prepared to house up to 30,000 people, but many of those displaced have gone to hotels.

Of the 150 dead, about 100 bodies have been identified, the officials said.

Monday's earthquake was about 10 kilometers (6.2 miles) deep, the USGS said.

The quake is the deadliest to strike Italy in decades, and the first major temblor to strike the country in almost seven years. Joshua Brothers, an American missionary, told CNN that the quake "sounded as if a 747 (jet) was actually coming in to land."

"That was the first thing that was on my mind," he said.

The quake left stone buildings in heaps, with rubble spilling over parked cars and into alleyways. Frightened residents rushed into the streets, many of them bringing luggage with them, Brothers said.

See images of the destruction »

"If you look along the way, there are many palazzi that are cracked, walls have fallen in on some of them," he said.

L'Aquila's hospital was damaged as well, forcing doctors to evacuate the most seriously hurt. Agostino Miozzo, the director-general of Italy's Civil Protection agency, called it "a disaster on a huge scale." iReport.com: 'The house shook for such a long time'

The magnitude 6.3 earthquake struck at 3:32 a.m. (1:32 p.m. GMT Sunday), Italy's . Berlusconi declared a state of emergency and canceled a trip to Russia to oversee the rescue efforts. Three significant aftershocks -- ranging from magnitude 4.3 to 4.8 -- shook the area within six hours of the quake, unnerving residents further.

See a map showing the epicenter »

The earthquake followed less than six hours after another quake hit the northern part of the country, the U.S. Geological Survey reported. Seismic activity is not uncommon in Italy, which is sandwiched between the European and African tectonic plates, and USGS geophysicist Amy Vaughan called the region geographically "complex."

Learn more about how earthquakes are measured »

In 1997, an earthquake killed 10 people in the Umbria region, left tens of thousands homeless and seriously damaged monuments and artwork, including the town of Assisi's famed Basilica of St. Francis.

About 17 years before the Umbria quake, a 6.5-magnitude temblor in southern Italy killed 3,000 people, according to the USGS.

Pope Benedict XVI was praying for the "victims, especially the children," killed in Monday's quake, the Vatican said, according to Italian news agency ANSA